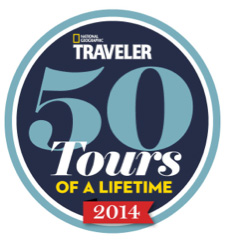 Editors note: More than half of the tour providers featured (31 out of 50) are current ATTA members:

“This year marks the 30th anniversary of National Geographic Traveler, which has always looked at the world through the lens of culture, nature and history. The tours we selected go beyond destination to add meaning and context,” said Norie Quintos, executive editor of National Geographic Traveler. “They open the mind to new possibilities, new connections, new ways of thinking — all critically important given the world’s complex issues.”

From joining a voodoo ritual in Benin to kayaking the canals and barrier islands of Venice to following the cheese trail in Vermont, the 50 guided tours offer authentic travel experiences that are sure to leave participants smarter, wiser and refreshed. The additional 10 expert-led, signature tours from the National Geographic Travel family include inspiring adventures from Antarctica to Cuba to the Galápagos.

The Tours of a Lifetime and their tour operators are: