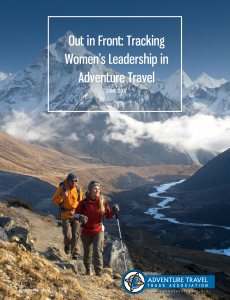 The Adventure Travel Trade Association (ATTA) has released a baseline study of women leaders in adventure travel, “Out in Front: Tracking Women’s Leadership in Adventure Travel.” The study, which set out to determine the current status of women leaders in adventure tourism, found that, compared to other tourism sectors, women are better represented on advisory boards. Additionally, women working in adventure believe their companies provide equal opportunities and equal pay for men and women.

Globally, women represent between 60 percent and 70 percent of the tourism workforce, according to data from the International Labor Organization (ILO). This same data shows women are not proportionally represented at the leadership level, nor in the government (where only one in five tourism ministers is female) or private sector. 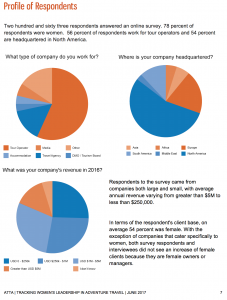 “Data is available about the tourism industry, however, we wanted to dig deeper into this particular sector because adventure travel is filled with businesses owned by women. Discovering the challenges these women owners — and other women working at adventure travel businesses — face can make us stronger as an industry,” said Ms. Casey Hanisko, ATTA’s vice president of marketing and communications. “We know there is a lot of respect in the industry across genders but there are also issues with harassment and women being ‘heard in the room.’ As an industry leader, we want to lead these conversations.”

Key findings of the report include:

As a leader in the adventure travel industry, the ATTA has set women’s leadership as one of its strategic initiatives for 2017. President Shannon Stowell has detailed some of the association’s goals and progress on the initiative.

Conducted by the ATTA, this research study consists of secondary research on gender studies from the travel and tourism industry as well as other sectors; results from an online survey, distributed by the ATTA to its members accessible from 14 March to 1 April 2017; and 12 interviews with women leaders in adventure tourism.

On 20 October 2017, the ATTA will host its first Adventure Women Leadership Studio at the Adventure Travel World Summit in Salta, Argentina. The Studio is designed to explore the implications and impacts felt by women working in adventure and discover what it means to lead authentically as a woman.

1 Comment to Out in Front: Tracking Women’s Leadership in Adventure Travel