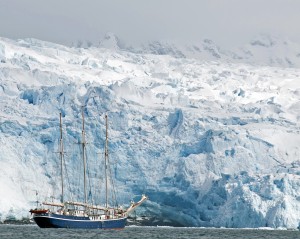 The old saying goes, “we’re all in the same boat,” but when it comes to the differences between mainstream cruises and small adventure cruises, this is not exactly true. As Jon Nicholson from Zegrahm Expeditions says, “The commonalities are water and ships – and that’s where the commonalities end.”

When most people hear the word “cruise,” they conjure images of massive ocean-liners and all-you-can-eat buffets, but this image completely overlooks small passenger vessels and adventure or expedition cruises. Tietse Selma, from 50 Degrees North, an operator selling Arctic trips with Hurtigruten, cautions word choice; when talking about his passenger vessels he says, “I’m very careful not to use the word ‘cruise’ for that.”

The adventure cruise segment is growing in importance within the adventure travel industry, according to newly released results of the Adventure Travel Trade Association’s (ATTA) Adventure Travel & Cruise Quick Poll. The study found that most relationships between the adventure travel industry and cruises are informal, but are still an important contributor to revenue. Single activity providers say 52% of annual revenue is dependent on cruise, while inbound and outbound tour operators claim 51%. Additionally, 66% of respondents prefer to work with small expedition cruise ships and yachts, while only 3% prefer to work with large cruise ships.

But what really differentiates an adventure or expedition cruise from a traditional cruise?

Most ocean liners can hold over 1,000 passengers (or “pax” in ship terminology) and river cruises and medium-sized passenger vessels can hold up to several hundred people. Small adventure and expedition cruises, on the other hand, generally carry 200 people at the most and usually closer to 100 pax, which is the size that most expedition companies say is best for a great experience. Many expedition cruises — often yachts or schooners — actually hold fewer than 50 pax. The smaller the vessel, the more individualized attention the vessel’s crew can give to each passenger and the more exciting and personalized the experience will be to each traveller on board. 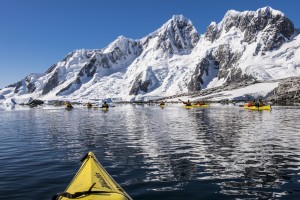 While mainstream cruises concentrate on relaxation and idleness, expedition cruises advocate for active and educational travel. “Our main focus is having lots of activities: kayaking, camping, mountaineering with guides, ski/sail trips, diving,” says Florian Piper, of Oceanwide Expeditions. “We try to keep sea distances short to make more time on land.The ship is a means of transport. We focus on destinations that you have to take a boat to get to.”

Expedition cruises such as the ones Oceanwide and Zegrahm offer focus on bringing people to remote, hard-to-reach places in numbers small enough to provide an authentic experience without harming the environment. To protect these remote and pristine destinations, multiple associations such as the International Association of Antarctica Tour Operators (IAATO) and the Arctic Expedition Cruise Operators (AECO) work with operators to set rules and regulations. They also created a ban on heavy fuel operated vessel at certain latitudes as well as heavy marine oil — instead, requiring usage of light marine gas oil, which is more environmentally friendly and breaks down faster in event of spill.

Life On Board Matters

Most operators agree that, unlike mainstream cruises with extensive onboard entertainment, expedition vessels are simply a means of transporting people to remote, hard-to-reach destinations, and the adventure is the outdoor activities offered. Instead of set, inflexible itineraries, Un-Cruise’s Blanchard says, “It depends who’s on board… We do all the best planning so we can deviate from it!”

Other details, such as food, are important as well. In an effort to avoid serving endangered seafood, Un-Cruise Adventures became the first cruise operator to be certified by the Monterey Seafood Watch, a program that monitors sustainable fishing. Zegrahm promotes sustainability by buying fresh, local ingredients before each voyage, also guaranteeing the flexibility of menus. 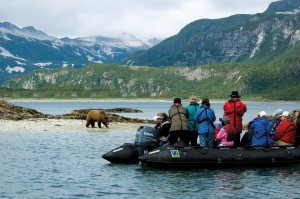 Adventure and expedition cruises seek out new and exciting itineraries and destinations instead of overwhelming the same tourist sites. Dan Blanchard from Un-Cruise says, “One thing that can’t be underestimated is human impact. Mass tourism brings people. 5,000 people in a town of 800 will overrun the town.” He explains that Un-Cruise has had to drop itineraries to save an area from overcrowding.

Oceanwide also has a “Cleaning the Shores” initiative. Working with the Svalbard government to reduce environmental impact, Oceanwide has created an annual voyage that carries passengers to remote shores where trash washes up and passengers effectively return the beaches to a pristine state. Un-Cruise passengers never disembark the ship without a garbage bag, and will switch landing sites if they become worried about their impact on the site. Blanchard’s team also notes that in general, adventure travellers are more curious and more concerned about their impact on the environment than mass tourists.

“People from far flung places always want to go to the same places they’ve heard of,” says Selma of 50 Degrees North. So, as the first defense of the Arctic, the company tries to convince would-be mass tourists to choose destinations farther off-the-beaten-path. In fact, most expedition cruise operators play this role, and in a way, not only are they limiting overcrowding in certain areas and creating ambassadors for conservation, they are also converting new adventure travellers.

Expedition cruise passengers “become ambassadors of the region,” according to Florian Piper. “They talk about the pristine landscape and how to protect them. [They learn about] climate change, wildlife and flora. In the end, they didn’t just participate in a holiday; they had a complete experience.”