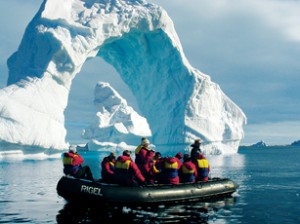 When Zegrahm Expeditions started 20 years ago, there were seven founders and four office staff. Today, Zegrahm has 32 employees, more than 70 expedition staff, and has hosted over 31,000 passengers on nearly 1,000 one-of-a-kind journeys to the far reaches of the Earth, from Africa to the Amazon, Antarctica to the awe-inspiring North Pole.

Zegrahm helped organize the first expedition to visit emperor penguin colonies in the frozen Weddell Sea; the first passenger dives to the undersea volcanoes of the Azores and to the wreck of the majestic Titanic

And, while those numbers are impressive in their own right, the company also salutes not one, but two loyal travelers who have reached 50 expeditions with Zegrahm and a special onboard party celebrates each traveler’s monumental milestone during their 50th trip.

Establishing itself as a leader early on by achieving a number of adventure travel firsts, Zegrahm helped organize the first expedition to visit emperor penguin colonies in the frozen Weddell Sea; the first passenger dives to the undersea volcanoes of the Azores and to the wreck of the majestic Titanic; the first expedition retracing the historic 1899 Harriman Expedition to Alaska; and the first adventure travel company to circumnavigate South Georgia, Newfoundland, and New Guinea.

Their thoughtful journeys are designed to educate and enlighten travelers about the natural and cultural world and in the last 20 years, they’ve opened a window to the incredible wonders of Easter Island; Iran; the Galapagos; Uganda; Madagascar; Uzbekistan; the Philippines; New Guinea; Indonesia; Micronesia; Melanesia, Patagonia, Kamchatka, the Kuril Islands, and beyond.

Looking ahead to 2011, Zegrahm is certainly not resting on any laurels with a series of new and unique journeys which include circumnavigating Sumatra and Sicily; in-depth trekking expeditions to Bhutan and Uganda; and sojourns that combine the urban with the ancient in the Persian Gulf, Black Sea, and Mediterranean.

It is hard to argue that Zegrahm & Eco Expeditions has found a winning combination; company president Jon Nicholson says, “Small expeditions, crackerjack leaders, environmental conscientiousness, and an ever-changing mix of intriguing adventures are what make Zegrahm unique and what keeps people coming back for more.”

If true adventure and exploration are what you seek in our ever-shrinking world you will want to take note of Zegrahm & Eco Expeditions. If the last 20 years is any indication, the next 20 are set to be a wild and highly enlightening ride.