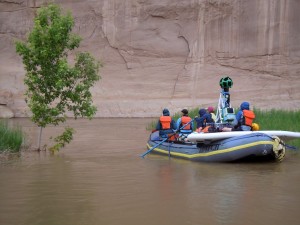 For George Wendt, President and Founder of O.A.R.S. Rafting Company, it’s an amazing advance since his first trip on the Yampa in 1965. Fifty years ago this summer the earth exploded around Wendt and a group of early rafters who were exploring the Yampa with WWII surplus equipment.

This tributary of the Colorado River system runs through Dinosaur National Monument and it’s the last remaining free-flowing tributary of the Colorado River. But on a June day in 1965, a massive debris flow, caused by a once-in-a-millennium rain event, formed one of the most notorious rapids—Warm Springs—in the western United States. Wendt narrowly escaped with his life.

“The roar was so all-encompassing that Wendt couldn’t hear the pounding on his outhouse door and the screams from two feet away. The world was melting in white noise. An inch of rain had fallen in about three minutes and now the lightning cracked across the western canyon sky in fast, strobe-like bursts…” So begins an account of that day written by journalist Tim Neville. 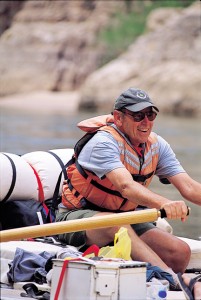 “By the time it was over,” Neville continues, “more than 33 million pounds of debris—enough to fill the floor of the Los Angeles Memorial Coliseum—would sluice into the Yampa River, dam it, then breach and transform a minor wave train into one of the most famous river rapids of the West.”

That experience changed Wendt’s life and “adds poignancy to my personal narrative about what running rivers has meant to me,” he says.  This summer, members of that original trip in 1965 will reunite on the Yampa for the 50th anniversary of their trip and the formation of Warm Springs Rapid. Geologist Bruce Julian, who was also there to witness it all, will be joining the trip to recount the events and interpret the geological forces that conspired that day.

Each year, from May through July, snowmelt in the Rockies brings Class III and IV whitewater coursing through the Yampa River Canyon with walls 1,000 feet that have their own stories to tell about the canyon’s various layers, each one representing an entire age of the earth’s development: the rise and fall of major mountain ranges, the arrival and retreat of oceans at least 12 different times, the alternating development of deserts and swamplands. A billion years are captured in these canyon walls, along with the remnants of various life forms that existed long before humans.