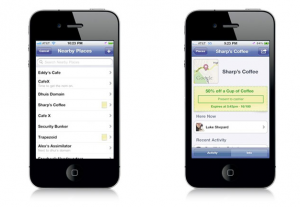 Author Stephen Joyce has published an intriguing article on Tnooz last week on the expansion of Facebook’s Deals application (from US-only to include United Kingdom, Canada and parts of Europe) and its challenging effect on Groupon, LivingSocial, TownHog and other models of local deals businesses in the travel deal arena.

Connected to the Facebook Places feature, the deals are offered to users who check-in to various businesses with their mobile device, thus offering a local deal while announcing the user’s presence to their Facebook networks.

Joyce posits that Facebook Deals poses a real threat to both location based services (Gowalla, Foursquare) that lack a large user base and the ability to tailor to user preferences, and to group deal sites (Groupon, LivingSocial) that cater to locals instead of travelers:

The three elements of location awareness, access to preferences through member profiling, and the ability to offer actionable deals combined together make the Facebook Deals platform much more compelling for consumers than any one of the other competing platforms on their own.

For businesses, the ability to control the offers and the cost (or lack there of) will be important motivators to try the Deals platform.  As we see more success stories, I wouldn’t be surprised if we start to see more buzz and hype around the platform…

For small tourism businesses, this means being able to deliver offers and build brand and service awareness beyond rack cards and hotel concierges, both of which are still important drivers for local tour and activity operators.

Regardless of the effectiveness of the Deals service in the future, small tourism businesses should be claiming their place pages and, at the very least, ensuring that their businesses are available on Facebook.

The key point in Joyce’s post, from my perspective, is specifically how to reach the ‘traveler’. This is not something Groupon and the others are positioned to do well. I can use their sites or mobile apps to select a specific location, but that list is still very limited…when outside the major cities.

Foursquare and Gowalla (Yelp, etc.) are nice for helping travelers find local businesses, operators, destinations near the traveler, but don’t have the volume of users of Facebook. Facebook has made it too easy to access their Places feature from their mobile app, which nearly every smartphone wielding Facebook user has. This clearly sets them apart from the others.

It’s important for businesses and tour operators to take these developments and all the noted players seriously. All of them will likely continue to have strong influence with their respective network of users and fans. Businesses and tour operators should at least spend some time to understand the potential opportunity and value of these new marketing channels to their business, and then determine the right level of investment both short-term and long-term.

Read the entire post, Facebooks Deals a killer blow to Groupon for travel offers, and join in the discussion in the comments area.