People travel thousands of miles to Zimbabwe to immerse themselves in a symbiosis of nature co-mingling with village life, hopeful always of extracting meaning beyond what they see in stock photos. 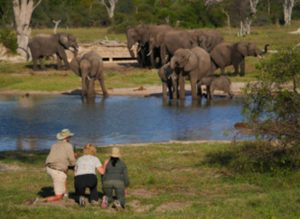 For 30 years Wildland Adventures’ raison d’etre has helped travelers reach beyond the clichés of destinations they visit. The company’s new Zimbabwe Conservation Safari is a hands-on journey through the heart of Africa’s wildlands with a modern-day conservation hero. Over nine days guests interact with villagers and elephants in ways that bring sustenance to community and wildlife alike. They begin to understand the issues behind and the possibilities of safeguarding wildlife to secure better lives for local people.

This safari, among others, turns over to a Zimbabwean foundation that conducts community work in Zimbabwe a $700 tax-deductible contribution included in each guest fee. Participants engage with villagers and school children while pounding a nail here, reading a story there and perhaps kicking around a soccer ball. Visitors roll up their sleeves to provide water for elephants to drink. The trip is led by fourth generation Zimbabwean, Mark “Butch” Butcher, who is a modern-day hero of African conservation. 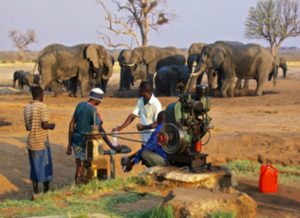 Mark, who won the 2014 Guardian and Observer ethical travel award, is an ecotourism pioneer, professional safari guide and leading conservationist in his native country. He receives Wildland travelers at his lodges in Victoria Falls, on the Zambezi River and in Hwange National Park where he shares stories about working as a game ranger fighting rhino poachers in the late 1980s. Today, he leads safaris and saves elephants by employing ex-poachers as his staff and they in turn protect wildlife for tourism that now pays their salary.

The program begins at a pioneering community-based tourism accommodation, Gorges Lodge, overlooking Batoka Gorge at Victoria Falls. Next guests board a 24-seat private rail car, the Elephant Express, that traverses a historic colonial-era railway line along Hwange National Park. On the vast game plains of Ngamo guests are accommodated in the luxurious Camelthorn Lodge for four nights going on safari each day and immersed in the daily life of a Zimbabwean village. Here they assist in wildlife monitoring, releasing animals from snares and assisting anti-poaching activities.  A day trip to Mfagazaan Pan introduces Hwange’s famous elephant herd sustained in the dry season on a pumped water program started in the 1930s.

While enjoying two nights in a luxurious tented camp on the Zambezi River guests go out on patrol with park rangers, a dedicated anti-poaching team who routinely patrol along the shoreline of Zambezi National Park. 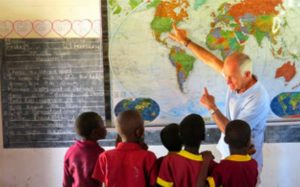 “For the rural villager living next to a national park, wildlife was by no means an attraction. Elephants ate their crops and lions killed their livestock. The animals were problematic and not something local people wanted to protect. Tourists who came to see the game typically passed by villages in safari vehicles and spent their money elsewhere. We’re proud to say that visitor by visitor we are helping to change this,” Kutay said.