In our line of work, it is a challenge to write a headline that comes across as negative. After all, our ambition is to share the unique, superlative, positive and perhaps even transformative aspects of the natural and cultural landscapes covering our magnificent planet. But in this brand new age of COVID-19, it’s tough to find many silver linings in the clouds hanging over travel and tourism. So many of us have worked so hard for so many years and “poof” it all seems to be on the verge of blowing away in the plague-stricken winds now circling the globe, winds that only seem to exacerbate many of the various pre-existing conflicts and inequalities that have worsened in recent years.

We stand to lose so much in this new, evolving reality, but at the same time, and despite how difficult it might be to think forward right now, we also stand to learn a great deal about our particular weaknesses and strengths and how we might have a fighting chance to make it through. Through to exactly what is hard to say at this point, but there will be a day when we can say that the crests of new coronavirus cases and the associated loss of life in indigenous and rural communities, cities, regions and countries around the world begins to fall and the severity of the pandemic is in decline.

When I think about Bolivia and the greater Central Andes region, where our company Sendas Altas works, I can think of so many things that we will lose if travel and tourism is severely impacted or disappears in the economic and cultural transformations that are inevitable in the coming months and years. To be sure, some of those things might be good to lose and while I don’t want to paint over the negative impacts travel has on the planet and its natural and cultural communities it would be dishonest to ignore the fact that tourism can cause harm.

Many travel experiences, for example, have extremely high energy costs and thus contribute to climate change and there are clear links between some kinds of tourism and human and wildlife trafficking, among other harmful practices. Overtourism is wreaking havoc on hundreds of natural and cultural heritage sites around the world and problems such as food waste and the unfettered use of plastics are lingering and growing challenges for us all. As practitioners of responsible tourism, we know and are concerned about such activities but all the same and in comparison to economic activities such as mining and industrial agriculture the positive impacts far outweigh the negative ones, calling us to do better.

So what are we afraid of losing? The list is a long one. Without tourism, we will lose protected area entrance fees, dignified and fairly paid work for guides and drivers, environmentally-responsible, family-owned lodgings and restaurants whose chefs are committed to using locally sourced ingredients…all in some of the most biologically and culturally rich and diverse landscapes on the planet, landscapes where inequality, corruption and lack of funds often keep such places from being adequately protected by local and national governments. We will lose hundreds if not thousands of jobs, some formal and others not, in hundreds of cities, towns, villages and hamlets where local communities have placed their bets on opening their homes to travelers from around the world.

We will also lose a deep source of support for the preservation of the cultural heritage of the Andes and the Amazon, the traditional farming systems that brought the world potatoes and quinoa, the ancestral music that lifts our spirits as high as the condor, the ancient rituals in their modern-day forms, the intricate handicrafts and beneath it all the sets of knowledge of these important parts of identities here and around the world. This is not to say that tourism and travel is the only reason or way to keep cultural heritage alive, but it certainly contributes a great deal to the often fragile sustainability of ancestral communities and their lifeways, especially if carried out responsibly.

Travelers come to the Central Andes to experience and participate in, for just a moment, the living history of the Andean people and their admirable and on-going struggles for postcolonial justice; to glimpse and perhaps venture into the snow-covered peaks of the world’s longest mountain chain; to literally touch, taste and feel the rich agricultural and gastronomic diversity of one of the world’s great centers of crop domestication; to admire the complex textile traditions Aymara and Quechua master weavers; to witness mega-diverse tropical forests and their inhabitants and to glide across the shimmering, lunar landscapes and below the galaxy-studded night skies of the great Uyuni Salt Flats and much, much more.

To be able to share all of that with our visitors in respectful, sustainable ways depends upon long-term, horizontal and transparent relationships that not only cross geographic boundaries of all kinds but also cultural and technological boundaries that can be just as challenging to surmount. Right now we are at risk of losing the decades long, hard work of building and maintaining vast networks of partners all working to share and showcase the best of our region. The longer tourism is in hibernation, the harder it becomes to keep those relationships active and alive and the more likely it is that our partners find themselves forced to transition into alternatives.

Yes, it is a lot to lose and those of us convinced that what we do is on the front lines of cultural and natural resource conservation are having to reckon with the potentially ephemeral nature of our work. The shut-down of local and international travel and most of the components of our worlds of work other than the virtual ones where we find ourselves stranded today have meant an almost instantaneous stop of everything we do, everywhere we do it, in a matter of days.

But we can’t just sit there watching it all fall apart, despite the fact that the “return to normality” that we are waiting for is not going to take place. The coronavirus pandemic is not only causing immediate and drastic changes to how we live and work but will bring long-term changes to the human experience and project, such as it is, everywhere. And lest we forget there are plenty of other crises being faced by humanity that have existed for decades if not centuries before this and that make the suggestion of returning to how things were before the virus swept across the planet not only impossible but offensive to consider.

We have no choice but to reassess how we are going to define and practice travel in the future both as travelers and as those who are on the ground doing our best to ensure that tourism is a source of health, resilience and respect in the world. This means that as conditions permit we have to learn from this existential moment and apply what we are learning in concrete, efficient and sustainable ways.

So what are we learning? Certainly it depends on where one is in the tourism and travel networks that crisscross the planet and cybersphere. What a novice or life-long traveler in Berlin or Shanghai is learning is one thing, while an independent travel planner unexpectedly working from home in Boise is learning another. Companies specializing in cruises, big and small, are clearly faced with unique challenges at this moment while natural and cultural history guides are being confronted with their own lessons. Trade associations, airlines, restaurants, hotels, museums, arenas and on and on will each have to assess the impacts of the pandemic on their livelihoods and what it will mean for them going forward.

Small and medium incoming tour operators such as ours and the hundreds of similar operations that exist and work on every continent are often the actors that hold the local networks together because we are the nexus between travelers and their activities on the ground when they visit our communities, cities, protected areas, markets and beaches. We are learning a lot, quickly, and from all sides.

We are learning how effective and efficient our financial management has been and what it means for our companies, our employees and our shared future. We are learning how strong, trusting and resilient our teams are and how much we can ask of them when they are under the multiple stresses of quarantines, caring for themselves and their families, tight living conditions, inadequate or inaccessible healthcare options, adaptation to working from home, and last but not least the immense uncertainty of when travel and tourism will resume and in what volume and in what timespan. We are learning that our commitment to our partners in communities throughout the region will only remain as strong and reciprocal as we’ve tried to make them.

We are learning a lot, to be sure, but perhaps the most important lesson is that we are learning to be patient, to wait and to have faith, no matter how stretched that faith may be, that what we do is valuable and needs to survive this horrible, confusing, scary moment. Because while tourism and travel does have negative impacts and can be practiced in exclusive, discriminatory ways, that’s not how we do it and doesn’t have to be so and the future will demand that it be evermore committed to resilience and sustainability.

The urge to seek out and experience something new is a universal characteristic of our species, no matter what our economic or cultural status. We want to know the other, in different ways and through different means, even if we are afraid of it or even if our own society has misled us into believing that we are somehow superior to that other. For those of us who aspire to provide responsible travel experiences, that is the whole point…we believe fiercely in the capacity of tourism to help one see the world a little bit differently and to be able to appreciate our beautiful planet in ways that reinforce the best of humanity.

So yes, we are losing a lot right now and while the moment might lead us to believe that we are losing everything, we are not. As we go forward, let’s keep the best of what we do. And while we wait this out, while we do what we can to comprehend what is happening and support each other as we address immediate needs amidst great uncertainty, let’s indulge in practicing and preparing for, dare I say, a better future. 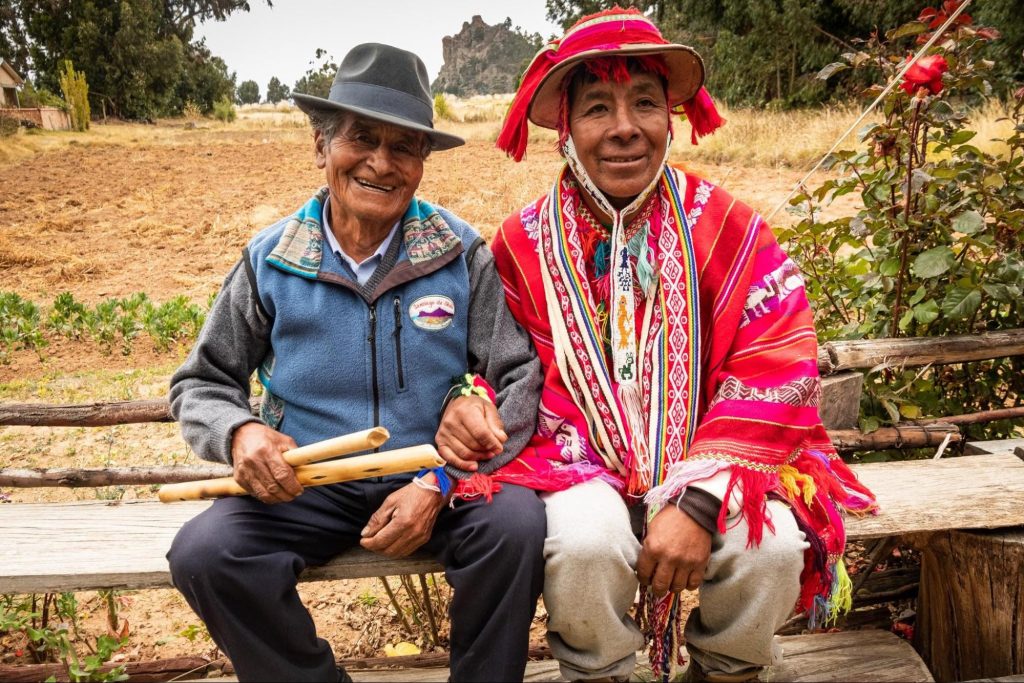 Travel and tourism brings cultures and countries together, as in this meeting between Aymara and Quechua community members collaborating with regional DMCs on a project to develop community-based trekking opportunities along Qhapaq Ñan, the Great Inca Highway, between Cusco, Peru to Uyuni Salt Flats in Bolivia.

Tourism, such as travel to the Uyuni Salt Flats in southern Bolivia, adds value to cultural and natural landscapes, value that in some cases can compete with other values such as those created by lithium mining, quinoa production for export and other activities that as currently practiced cause great harm to local communities, biodiversity and the climate.

1 Comment to What We are Losing, What We are Learning: Early Reflections from Bolivia on the COVID-19 Pandemic