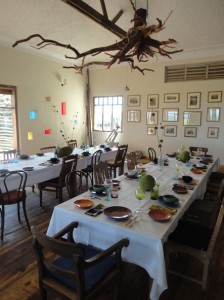 KAMPALA, Uganda—Volcanoes Safaris, specialists in mountain gorilla safaris and tourism in Uganda and Rwanda is announcing the grand opening a brand new ecolodge near Africa’s Kyambura Gorge in Queen Elizabeth National Park. The only company to have built three of its own exclusive safari ecolodges near Africa’s mountain gorilla parks, Volcanoes Safaris unveils its fourth lodge with the opening of Kyambura Gorge Safari Lodge in July of 2011. The lodge, in addition to offering exclusive access to Queen Elizabeth National Park also offers guests the once in a lifetime experience of going chimpanzee tracking in the Kyambura Gorge.

The Kyambura Gorge Safari Lodge will help to protect an isolated community of chimpanzees and create a buffer zone between the gorge and the surrounding communities. Research sponsored by Volcanoes Safaris and conducted by researcher Nicole Simmons revealed that only 22 chimpanzees remain in the isolated troop that live here, about half that of 20 years ago. The Volcanoes Kyambura Gorge Ecotourism Partnership, a major long-term Kyambura Gorge eco-tourism partnership project, will link the eco-lodge that is being built to the community, promote the conservation of chimpanzees, and create a buffer zone to help protect the Gorge. 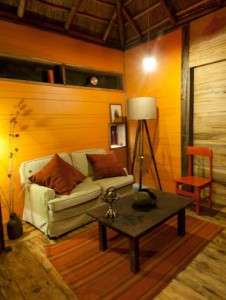 The Volcanoes Trust is working with local communities to help promote the conservation of chimpanzees and the benefits of tourism to the area. On the savannah plains below, the Kyambura Gorge Lodge is being built near the Kyambura Gorge at the edge of Queen Elizabeth National Park. The Gorge is almost at the geographical center of the Greater Virunga Landscape, at the heart of the Albertine Rift that straddles Uganda, Rwanda, and the DRC. This landscape is one of the most important areas for avian, primate and wildlife biodiversity in Africa.

Like Volcanoes Safaris’ other ecolodges, Kyambura Gorge Lodge will continue to build on the philosophy of being ecologically sensitive and working closely with local communities. Kyambura Gorge Lodge will initially have 4 rooms that overlook the Gorge and rolling savannahs of Queen Elizabeth National Park and will open in July 2011. The original site for the lodge, adjoining the gorge, had about 25 acres. They have since increased it to about 60 acres of land to protect the neighboring areas of the gorge by creating a buffer zone between them and the gorge, as well as purchasing the site of an illegal brickworks, which will be reconverted back to wetland.