VisitBritain has teamed up with Facebook Places for a an interesting social media promotion, inviting global Facebook fans on their Love UK page to check in at two locations around the country to be entered into a drawing for either a UK holiday or shopping vouchers. The check-in information acts as a voting system to constantly update a list of “Top 50 UK Places.” Designed by Betapond, the promotion now hosts about 300 tourism spots but is expected to offer check-in capability at more than 50,000 locations in the country as both the number of consumer  users and paid advertisers grow. 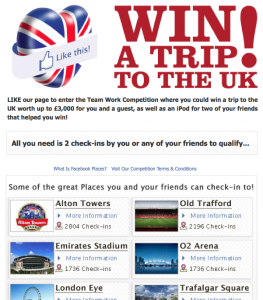 The promotion advertised on Love UK's Facebook page, which has more than 68,000 fans and counting.

Dubbed “a global guest book” for Britain, the league table is expected to become a hugely influential barometer showing shifts in opinion about our most cherished icons, landscapes and attractions as they happen… Developers expect excitement to build as attractions vie with each other to secure the top slots in the table which will be constantly updated and tourists make new visits.

The new development is based on the new Facebook Places technology, a feature that lets users “check in” to Facebook using a mobile phone, tablet or computer to let a user’s friends know where they are at that moment.  It is the first time the system has been used to promote a whole country.

It creates a huge opportunity for the tourist honeypots of the UK to get themselves noticed alongside the big names such as the London Eye, Edinburgh Castle, the Giant’s Causeway and the Cardiff Millennium Stadium. All major attractions will be able to register to take part in the scheme and encourage their visitors to check in and do a review of what they find.

Users checking in to VisitBritain’s Facebook Places page will be encouraged to write a little review. For example someone might write, on reaching Stonehenge, a mini-review saying:  ‘’Stonehenge is awesome. But don’t forget to check out Avebury stones a few miles down the road.’’

They will automatically receive information about which of the traveller’s friends have also been there – and what they said about the location.

Arrows will show whether particular attractions are rising or falling in the league table as more “check-ins”’ arrive. Free attractions will carry a special logo…