Though hints of virtual reality (VR) have touched society over the last several years, it wasn’t until 2016 when the more mainstream, commercial products Oculus Rift, Playstation VR, and HTC Vive came onto the market. Practically overnight, the idea that people could immerse themselves in a technologically generated scenario simulating the real world became a reality. Since then, VR has disrupted, advanced, and challenged industries ranging from automotive technology and gaming to retail and media.

The emergence and increasing use of virtual reality is one of the most notable trends in the travel industry. Learn more about this trend and several others in the recently published, free ATTA report, 20 Adventure Trends to Watch in 2018.

Travel and tourism is no different: Using VR technology, today’s travelers can stand on mountain peaks and dive to the deepest depths of the ocean without ever leaving home. But what does this mean for tour companies and destinations, have adoption strategies for this technology been successful, and is now the right time to jump on the virtual bandwagon? 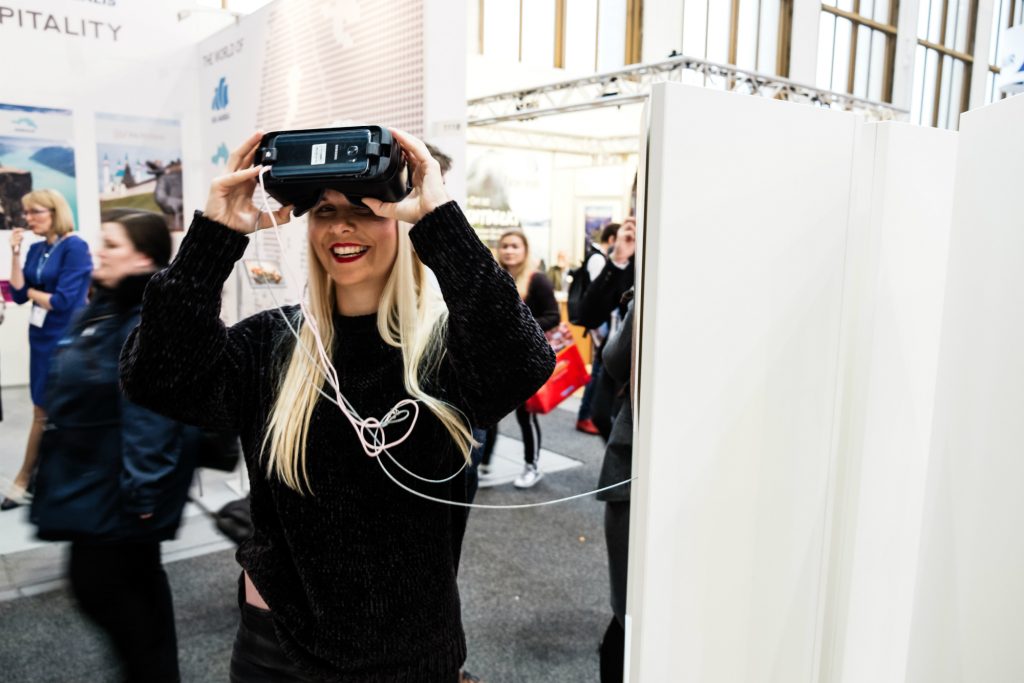 The Next Big Thing or a Current Fad?

Though a number of companies and destinations are dabbling in travel-related VR, one of the primary questions about the technology is whether it will become a mainstream feature or is simply a current trend that will eventually fade away. As industry professionals debate whether it’s worth jumping into the fray, there are two challenges that surface regarding the technology.

The first challenge is cost and accessibility. Businesses can invest in developing VR products, but will their potential customers be interested in or able to use them? People may be mildly curious about VR, but since it’s not been a part of their lives, they may not actively seek it out for adoption. Also, offering VR film experiences early in the customer journey through accessible means such as YouTube assumes customers will use the technology, but in truth, they may not because 360-degree video is only part of the viewing equation. Though there are commercial headsets on the market, they aren’t common in most households. Travel-related VR has been increasingly showcased at trade shows, but this is not the environment in which most people are conducting in-depth research about or booking an upcoming trip.

During the early stages of technology development, there is also an issue of numerous players becoming involved in the space. HTC, Lenovo, Huawei, and other developers have introduced their own products in the market, but they all have slightly different features. This means a VR video designed for one of these headsets may not translate as well on another, resulting in software fragmentation and yet another potential setback for an already potentially pricey marketing investment.

Additionally, while the inspiration and research phases of the trip may offer the most obvious opportunity for utilizing VR, the question remains whether it serves as a marketing enhancement or travel deterrent. If people can ride in a hot air balloon and watch the Serengeti wildebeest migration below from the comfort of the couch, do they really need to spend thousands of dollars to book plane tickets and tours to do the same thing in person? “It can become a cheaper alternative to travel,” said Milena Nikolova, an expert on traveler behavior trends and director of knowledge and AdventureEDU at the Adventure Travel Trade Association (ATTA). “Why would you take four days and a lot of money and maybe a lot of risks to take a long weekend in Paris when you can walk the streets of Paris or climb the Eiffel Tower through virtual reality without the long wait, without the security threats, without being concerned about the weather?”

Despite these concerns, some adventure industry pioneers have become early adopters, experimenting with VR to see what is possible and gauge public interest at the cross-section of the technology with travel.

“Virtual reality is one way to decrease that sense of risk for potential customers.”

Perhaps one of the most obvious applications for VR within the travel industry falls within the early stages of the customer journey. Because the opportunities for travel are so vast — where to travel, how to get there, what to do, how to prepare — there are a lot of questions customers want answered. Further, travel experiences are major financial and time investments people make without really being certain if they will be as promised (unless they have been to the destination before). Enter VR, which can allow potential travelers to preview and “sample” a place before they make the decision to buy. “Virtual reality is one way to decrease that sense of risk for potential customers,” Nikolova said.

The marketing implications of VR offer a vast array of opportunities, and this is where many early adopters are testing the VR waters. 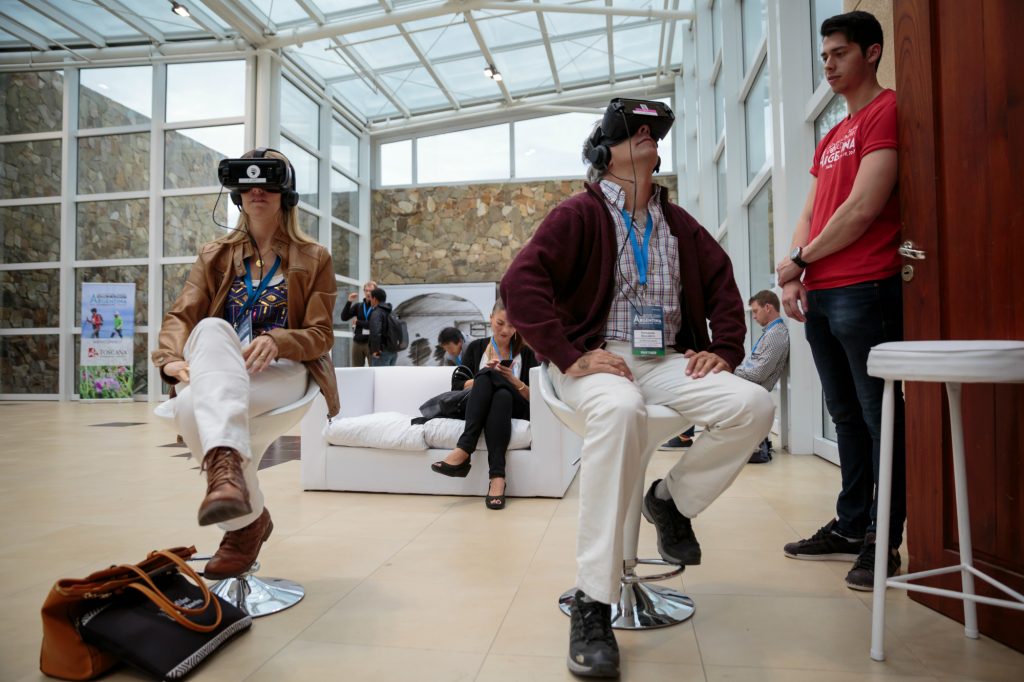 Once travelers have booked a trip and have feet on the ground, VR can help to enhance experiences. The technology can also help feed the current adrenaline rush to encourage booking for in-destination experiences and future trips. While travelers can smell that ocean breeze, hear the jungle sounds, and taste the local food, this might be the perfect time to nudge their interest in returning for another vacation.

“VR can also engage people in experiencing something they wouldn’t ever be able to do.”

Additionally, not every destination is fully accessible. VR can help round out a visit by offering access to areas that might be too remote, too expensive, too fragile, or no longer in existence. “VR can also engage people in experiencing something they wouldn’t ever be able to do,” Nikolova said, noting museums and attractions can enhance the visitor experience by allowing people to fly military airplanes and walk through nature reserves that are off limits. Visitors can poke around archeological ruins, get an up-close view of delicate artifacts, and sit among endangered species without disturbing any of these things in reality.

Also, not everyone is able to travel, but VR can still feed that sense of wanderlust. “Some companies are creating experiences for people who are unable to travel for whatever reasons, maybe health reasons or physical inabilities, to actually go and visit destinations that they wouldn’t normally be able to visit because of their age and health conditions, so there is a social aspect that comes with the replacement effect,” Nikolova said. MyndVR and Littlstar recently partnered to start delivering immersive content specifically designed for a 55+ audience. The goal is to deliver original content, including travel-related experiences, designed to help improve the minds and lives of adults 55 and older. And Embrace The Life VR is creating fully immersive experiences for wheelchair users that include a physical wheelchair as part of the simulation.

VR can also give travelers a chance to visit places currently hitting a saturation point without further contributing to the problem. Destinations suffering from overtourism, in particular, may consider adopting VR so people can visit without ever adding another physical body into the mix.

Additionally, while most travel and tourism professionals are using VR as a customer touchpoint, companies can look internally as well. Lufthansa uses a number of innovative techniques and materials to train flight attendants and senior cabin crew members, including VR. In an industry like adventure travel, where company headquarters may be half a world away from tour destinations, perhaps VR could be used for guide training, putting employees on the ground to see and “experience” potential places and issues they might meet on the job.

Though VR is a hot topic right now, it may very well just be in its infancy. Where it goes from here is anyone’s guess, but for those working in the travel and tourism industries, the sky is the limit … and so are the deepest oceans, the densest forests, and the most isolated places on Earth.

3 Comments to Virtual Reality: Insights and Opportunities in the Travel Industry