The sun had already dipped below the horizon line when we finally tumbled out of our oversized SUV in Salida, Colorado, to a waiting crowd of colleagues. Nearly the last to arrive at the annual Adventure Travel Trade Association (ATTA) team retreat, the six of us were greeted with enthusiastic hollers, wrapped in hugs, and immediately swept into comfortable camaraderie with this crowd of nearly 40 ATTA team members who gather annually from the far corners of the world.

The ATTA team works 100% remote. Though a few of us live near each other, the vast majority of our face-to-face time is during online meetings and at events. Usually our conversations are cut down to words and phrases we drop into Slack. So, when we actually pick up chat conversations and turn them into spoken words, get to know each other beyond our events and online bios, and actually engage in the adventure activities we so passionately support and promote, it probably comes as no surprise that this single week every year when we get together for our team retreat is especially meaningful. 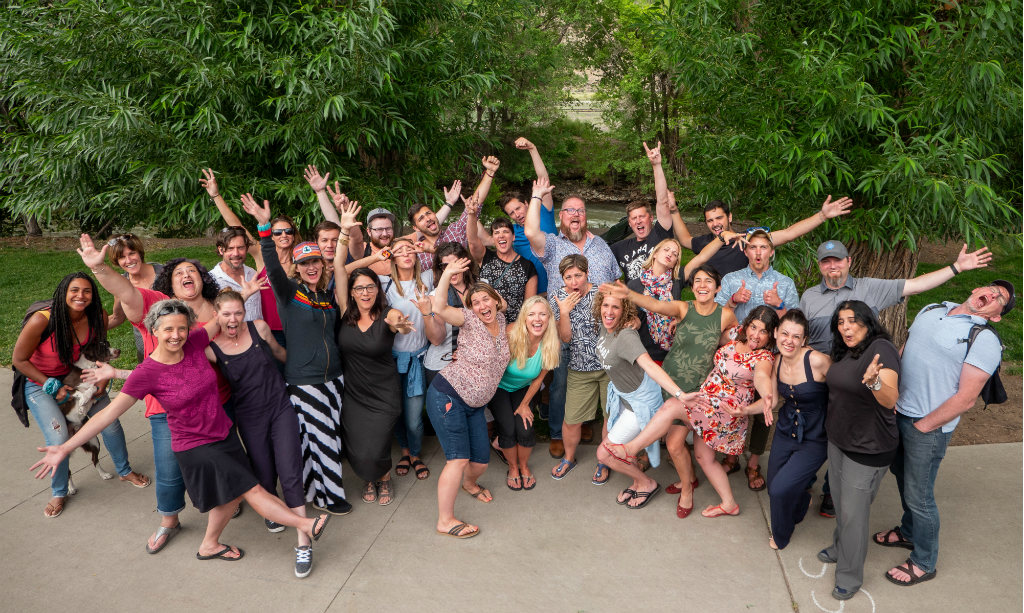 This year, we had something particularly special to celebrate: the 15th anniversary of the current incarnation of the ATTA.

Though the first evening of our retreat was filled with long-overdue, in-person conversations, Shannon Stowell (today the ATTA’s CEO) officially kicked off our time together the following morning by sharing the ATTA’s history. When Stowell decided to acquire the fledgling organization in 2004, he saw the promise of what it could be. With Chris Doyle, the ATTA’s current executive director of Europe and Central Asia, by his side, the two rallied their personal and professional connections, asking people to believe in their vision long enough to breathe life into an organization barely getting by in survival mode. They worked long, laborious hours, inviting in innovative and hard-working people to begin shaping ATTA into a forward-thinking, ambitious, and influential organization.

This community of like-minded professionals — many of whom remain supporters of the ATTA as members, close advisers and friends, and even staff — gave up their nights and weekends to send emails, make phone calls, give advice, recruit event delegates, and trumpet the importance of uniting the adventure travel industry around a strong set of values and singular mission. “We went out to a few dozen influencers of that time and conveyed what we’d hoped to accomplish. Despite them telling us ‘There’s no way you can do that!’ along the way, they still had hope and supported us because, I believe, they wanted to have a collective voice, to stand up together and give ‘form’ to the adventure tourism sector,” Doyle said. “The ATTA, with these ‘legends’ and with the progressive, dedicated, passionate community rallying at our sides from the beginning, helped to make this a reality.” It is the passion upon which this organization was built that has fostered a team where we naturally feel like friends as well as colleagues even though we rarely see each other in person.

The goal of the annual ATTA team retreat is not to squeeze as many meetings into four days as possible. In fact, we’re encouraged not to spend too much time on structured work — those meetings can happen online once we’re all back in our respective desk chairs. Instead, the program design lets the week unfold organically, dipping in and out of conversations about both industry-related topics and seemingly irrelevant small chat that generally happens around the proverbial water cooler. We brainstorm ideas, talk about awesome places we’ve traveled, catch up on family news, and learn those I-had-no-idea facts about each other that get impressive nods of approval and stir up more ideas. (Who knew we had a medal-winning discus thrower among us? And one of us has participated in a parabolic flight through a cosmonaut training program designed for space enthusiast travelers.)

More importantly than the what of the ATTA’s foundation, the retreat allows our team to think about, grapple with, and talk through the how. This year, innovation catalyst and workshop leader Lee Kitchen (an AdventureELEVATE keynote speaker) worked with the team through a series of exercises that got us fired up and swimming through creative ideas about how to take the ATTA into the future in a way that magnifies its positive impact. Even the few who couldn’t be there in person called in to join the lively action.

“What does our future look like?” Stowell asked us before we dove into the exercises. “In some sense, a lot like today. Some of the things we’ll accomplish we can’t imagine yet but it will be this group that continues to pave a path.”

With Stowell’s words in mind, we envisioned the adventure travel industry and the ATTA’s position within it from all directions, building off each other’s creative thinking and owning up to any roadblocks we threw along the way. Team members who rarely work with each other engaged in deep, thoughtful discussion, mining each other’s expertise, experience, and excitement. We scribbled out notes, drew pictures, welcomed any and all outlandish thoughts, listened intently, laughed hard, and learned a lot. The walls filled with sticky notes and poster-sized paper, and I’m convinced some of the thoughts contained within them could truly change the direction of the adventure travel industry and maybe even the travel industry at large.

“The ATTA would like to be a leader in the travel industry, ensuring a safe and sustainable industry that is a force for good,” said Casey Hanisko, the ATTA’s president. “Our expertise with adventure can be utilized to ensure that destinations, businesses, and any consumers involved in all of travel are educated and aware of the needs of travelers to deliver high-quality active experiences.”

Of course, it wouldn’t be an ATTA get together without a touch of adventure. Our conversations carried out of creative brainstorming sessions and onto hiking trails and a whitewater rafting excursion. They continued over meal prep and as we watched the sun set. When Stowell and Doyle decided to pull the ATTA up by its bootstraps in 2004 to become a hub for the industry’s collective voice, there was no way to predict that 15 years later 30 of us would be singing “Happy Birthday” (and variations thereof) in nearly a dozen languages to celebrate 15 years of the ATTA. 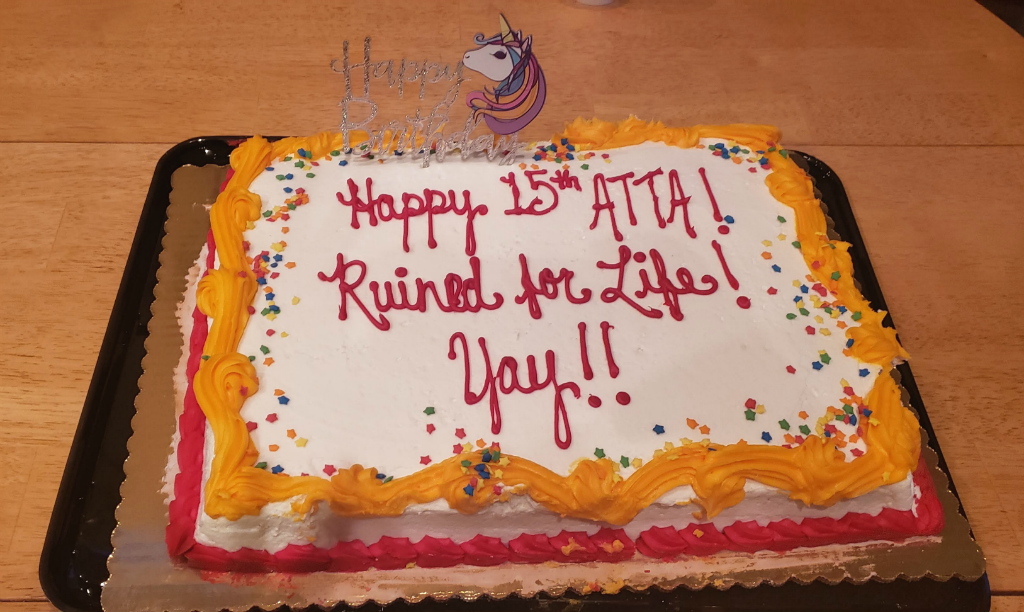 The ATTA’s core team has rapidly expanded in recent years and today consists of 38 people based in eight countries. Considering the milestone achievements of the organization, it’s sometimes hard to believe there are only 38 of us. Here are just a few stats highlighting how ambitious the organization is:

“I am very proud of the team and their continued daily effort to deliver for our members and the industry. One of the questions I’m often asked is, ‘How does ATTA do so many different things so well?’ My immediate response is, ‘Our team. The team is passionate about serving the industry in the best way possible, and come to work every day ready to give everything they have to give,’” said Jason Reckers, chief operating officer of the ATTA. 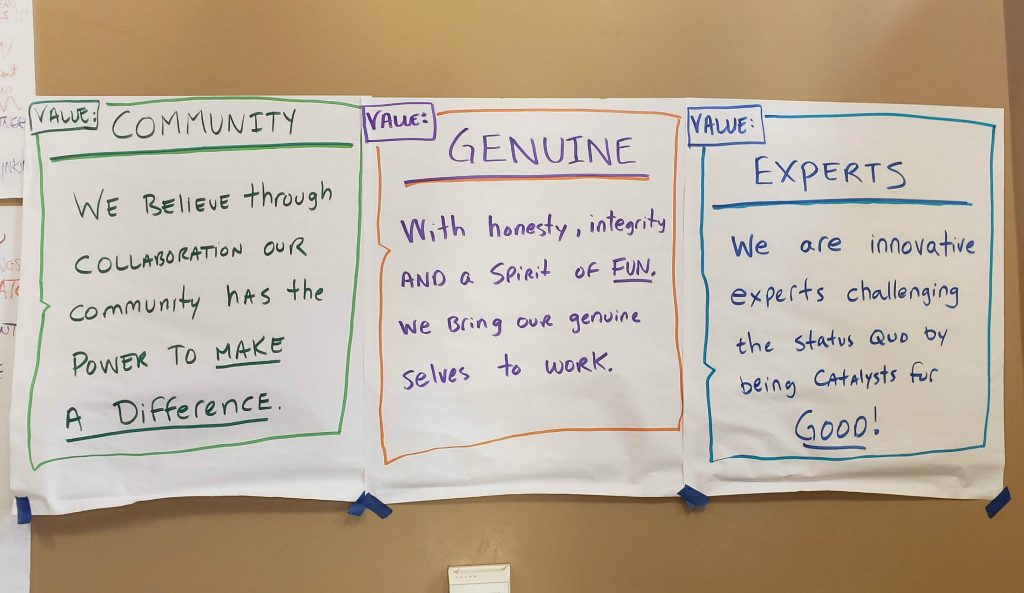 At this year’s event, team members grappled with how to lead the association into the future in a way that magnifies its positive impact while keeping its core values in mind. © ATTA

Far too quickly, the annual team retreat came to an end. Our time together whittled down to mere hours and then carpools began their journeys back to the airport. With newfound inspiration and motivation, however, we were also eager to get back to work.

But for four days, we asked the hard questions and questioned the easy ones. We danced and chatted and untangled the world’s problems — at least for a moment. We told stories and reminisced about the past, newer team members taking in all that our seasoned colleagues had to offer. And we created new memories — together, in person — that we hope to share 15 years from now.