Tierra del Fuego is an island on the tip of South America that is divided in half, with one part for Chile and the other for Argentina. Like many international borders, however, this imaginary line doesn’t separate the flora and fauna, shared history, and cultural heritage left behind by its native and immigrant peoples on the island.

During AdventureWeek Tierra del Fuego in May 2017, this border also did not stop 20 international buyers and media who traveled to the end of the world for a 10-day event highlighting the best of adventure on both the Argentine and Chilean sides of Tierra del Fuego. Their legacy of exploration lives on, and we invite you to enjoy AdventureWeek as documented by the ATTA storytelling team.

Published stories have also started spilling in from AdventureWeek. We encourage you to read about Tierra del Fuego adventures from several journalists who attended AdventureWeek. 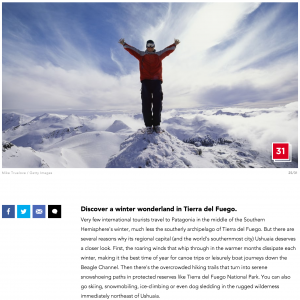 Men’s Journal
“Very few international tourists travel to Patagonia in the middle of the Southern Hemisphere’s winter, much less the southerly archipelago of Tierra del Fuego. But there are several reasons why its regional capital (and the world’s southernmost city) Ushuaia deserves a closer look.” 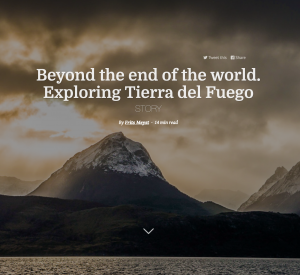 4 Ever Travel
“A condor soars overhead looking for a cadaver as we hike through the bust that abruptly ends on the edge of a cliff with splendid views over the Beagle Channel. I can see why Darwin was thrilled by the wildness of this strange land.” 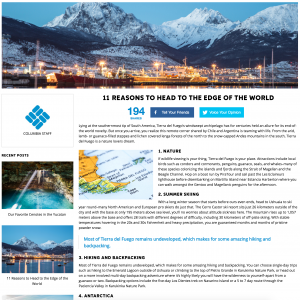 Columbia Blog
“With stable temperatures hovering in the 20s and 30s Fahrenheit and heavy precipitation, you are guaranteed months and months of pristine powder snow.” 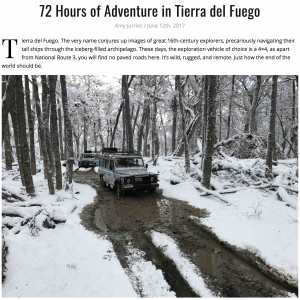 Expedition Portal
“The saying goes that if you drink calafate, a liquor made from a local berry, you will once again return to Tierra del Fuego. Sipping our calafate sours in front of the fire post dinner, we hadn’t yet left but were already sure we would be back.”

The ATTA partnered with Patagonia (Chile) and Tierra del Fuego (Argentina) for this specialized familiarization trip, which was designed to offer exposure for Tierra del Fuego as an adventure travel destination.