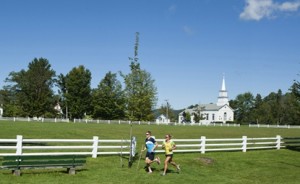 Vermont is repeatedly ranked the Healthiest State in the nation. From its chiseled farmers to Olympic skiers and riders and mountain biking mommas, it shows. In the Green Mountain State, there’s an ultra-marathon, adventure race, century ride, distance swim or yoga-fest for all athletic appetites. Sports enthusiasts come to train, race, compete, tour and experience the state’s beautiful landscape. Of course, Vermont’s farm to plate culinary scene also plays a large role in fueling and tantalizing visitors and local athletes alike.

Vermont’s sports events schedule is proliferating; plus, the caliber of the events and participation continues to increase and appeal to destination-savvy athletes. Seventy-five percent of marathon runners in the KeyBank Vermont City Marathon, the state’s largest marathon, come from out of state. Other races like the Half Marathon Unplugged doubled in participation in the last two years and the 24th annual FirstRun 5k on New Year’s Day saw 107 percent growth from 2009 to 2012. The fact that the 5k race is growing most quickly, followed by the half marathon, reveal a welcomed increase of new runners regionally, reports RunVermont.

This season’s events “run” the gamut from gentle to grueling; the choice is yours: