Vagabond Small Group Tours of Ireland is no stranger to accepting awards. In early February the company received not one but two 2019 Irish Tourism Industry Awards presented Feb. 2 at the Clayton Hotel in Dublin. 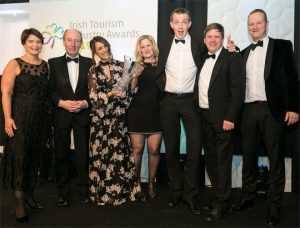 These awards recognize those people and companies that create enhanced experiences to draw people to Ireland. Awards are granted across 15 categories for general initiatives such as accommodation and marketing, and regional specific awards for the Atlantic Way, Hidden Heartlands and Ancient East. Fifteen winners were chosen from among 75 shortlisted nominees.

Vagabond Small Group Tours of Ireland’s 6 Day Ancient Ireland Tour won in the category Best Ireland’s Ancient East Tourism Experience, under 25,000 visitors. “We introduced this tour in 2018 to help answer the question, ‘Who are the Irish?’” explained Rob Rankin, who is co-owner of the company with his wife, Amy Rankin. In their imaginations guests burrow into bogs, scale crenellated towers and shimmy up mountains for glimpses of Ireland beginning with Iron Age Celts sifted into Stone Age sands.

Best Environmental Tourism Innovative went to Vagabond Tours of Ireland for environmental initiatives that in some instances have led to significant cost savings for the company while other initiatives are viewed as company investments that “we hope will have a long-term benefit to the environment,” said Rankin. These include:

Vagabond’s staff curate locally owned accommodations, pubs, and restaurants that help serve their goal of authenticity. In the end the mission is to have guests “love Ireland as much as we do.” Transport is in custom mini buses, Mercedes ‘Vagatrons’ or 4×4 Sprinters Newtrons that allows access beyond where regular tour buses go.