From the plains of the Serengeti where lions roam freely to the warm tropical waters that sea turtles call home, wildlife has long been a lure for travelers who hope to spot creatures in their natural habitats. But even as people specifically seek out wildlife-specific travel experiences, other people are destroying these animals for a profit — and at an unprecedented and alarming rate. Over the last 10 years, an industrial-scale killing spree of endangered animals has become a multi-billion-dollar criminal industry, making wildlife trafficking the fourth largest transnational crime, just behind the drug and arms trade and human trafficking, according to the United States Wildlife Trafficking Alliance (USWTA). 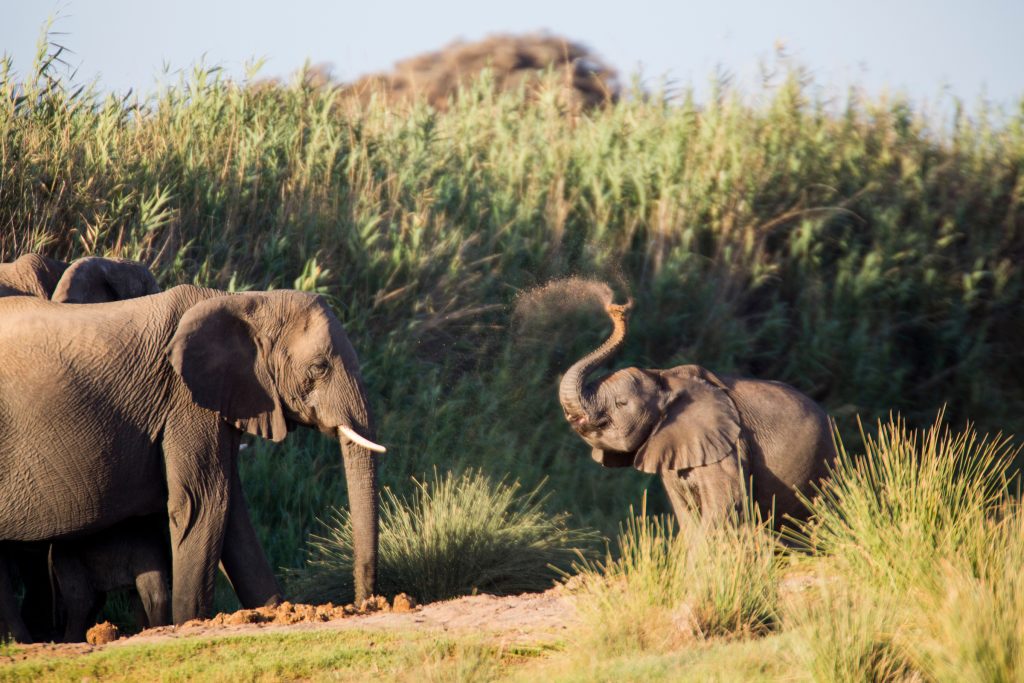 Though elephants are still a prime target for poachers, many other species are also victims of wildlife trafficking. © ATTA / Dan Sandoval

The USWTA, a voluntary coalition of many organizations and companies including the Adventure Travel Trade Association (ATTA), works tirelessly to raise the public’s awareness of the scope of the wildlife trafficking situation and its devastating impact on elephants, rhinos, marine life, and more. Though United Nations international days such as World Environment Day on 5 June offer an opportunity to educate travelers and trade professionals on the current status of this ongoing crisis, the “second big wave” of wildlife poaching, which combines an increase in global demand for wildlife products with a new sophistication of transnational criminal networks, shows no indication of slowing down, said Sara Walker, executive director of USWTA.

Travelers may seek out Africa’s plains or Caribbean waters for animal sightings, but wildlife trafficking reaches all corners of the globe. “Money from the illegal wildlife trade has been linked to terrorist organizations, drug lords, gangs, and corrupt governments — all at the expense of wild animals, the environment, and our national security,” Walker said.

Elephant poaching was big business in the 1970s and 1980s, and a new demand for wildlife products has resulted in yet another surge of poaching and trafficking. Today’s poaching efforts are more coordinated with high-tech equipment and global networks that overwhelm park rangers despite their best efforts to keep wildlife destruction under control. Many of the globe’s endangered species have reached a tipping point: According to a recent World Wildlife Fund report, we have lost 58% of wildlife in the past four decades, and by 2020, we may lose two-thirds.

As such, governments around the world are responding to this multifaceted problem. The U.S. government released the National Strategy for Combating Wildlife Trafficking in February 2014, which includes efforts on behalf of 17 federal departments and agencies addressing wildlife trafficking in the most strategic and effective ways possible. In September 2015, both the United States and China announced intentions to clamp down on the import and export of ivory. And, at the Convention on International Trade in Endangered Species of Wild Fauna and Flora recently held in Johannesburg, South Africa, a number of animal and plant species were granted increased levels of protection including pangolins, African grey parrots, devil rays, and softshell turtles.

When many people think about poaching, elephants likely come to mind, and, certainly, elephants are in a very perilous position. According to the Great Elephant Census, African savanna elephant populations have decreased 30% in the last seven years, but a number of other endangered animals are also succumbing to the pressures of poaching because the demand for animal-related products exists. 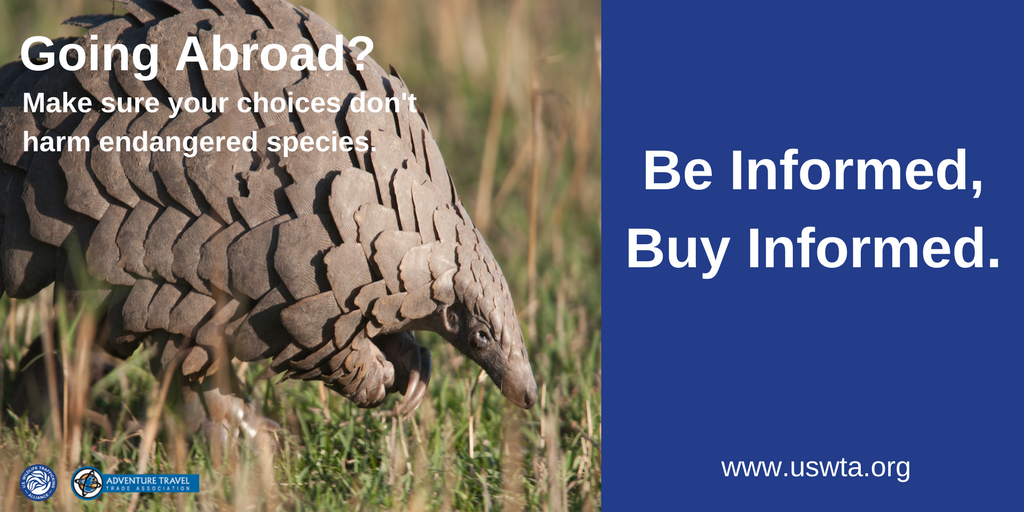 “Sea turtles are being killed at alarming rates to keep up with the pace of demand for its eggs, meat, and shell; the latter being used to make jewelry, accessories, or trinkets. Ingredients for traditional medicines are wiping out populations of tiger, rhino, and pangolins — now the most trafficked mammal in the world,” Walker said. “Many species of exotic birds are now endangered to fuel an illegal live pet trade. And many big cats are on the brink due to demand of their pelts for items such as clothing and rugs. The list goes on.”

Unfortunately — and often unknowingly — travelers feed that demand, especially when it comes to buying souvenirs to commemorate a vacation. A recent report called Endangered Souvenirs found that many souvenir vendors in tourist hotspots in Costa Rica, El Salvador, Honduras, Panama, Belize, Nicaragua, Cuba, Grenada, and Colombia sold products made from the critically endangered hawksbill sea turtle, including bracelets being sold for as little as $1 USD. North Americans and Europeans pay the highest prices for these products, and cruise ship passengers are primary consumers in many of these Latin America and Caribbean destinations.

Without demand, there is no need for supply. To address this, the USWTA was formed to bring together nonprofit organizations and private companies across several industries, including travel and tourism, which has “a unique and important role to play in fighting the scourge of wildlife trafficking,” Walker said. “Travel companies have the ability to help us reach millions — or billions — of travelers each year by educating them about the illegal trade and empowering them with the right information to ensure they are not contributing to this global crime.”

The organization has partnered with the ATTA, the American Society for Travel Agents (ASTA), and Cruise Lines International Association (CLIA), all of which have made commitments to help educate travelers and raise awareness about the role travelers play in perpetuating or ending wildlife trafficking. The three associations serve more than 25 million travelers annually.

“By helping to fight wildlife crime, the travel industry also is taking steps to ensure that travelers will continue to have the ability to see the world’s iconic wildlife in their natural setting,” Walker said. “For the animals, this is a matter of life and death. But for many who depend on tourist revenues, it’s a matter of livelihood as well.” The USWTA’s “BuyInformed campaign is designed to educate travelers of the prevalence and severity of wildlife trafficking in destinations around the world. As noted on it’s website, “just because something is for sale doesn’t mean it’s legal to take home.” The alliance’s partners play a key role in reinforcing this message.

“The cruise industry is committed to informing passengers about the illegal wildlife trade and how to avoid situations where the inadvertent purchase of illegal wildlife, including tortoises and tortoise-related products as well as other marine life, may occur,” said Michael J. McGarry, senior vice president of public affairs and government relations at CLIA. 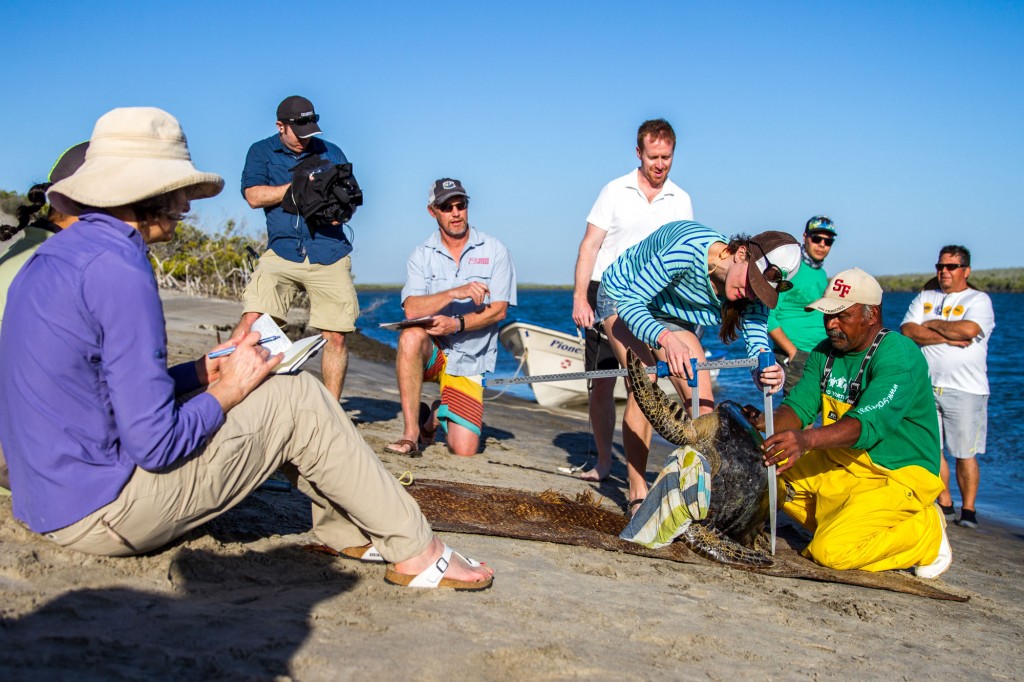 At the ATTA, a 12-month marketing program is underway with a number of industry- and consumer-focused initiatives designed to keep the issue top of mind for those working in adventure travel. “For so many years, Leave No Trace has been the primary mantra in the adventure and outdoor space, and it has guided the education given to travelers. But it is about more than that. Travelers now need to be educated on other ways their vacation makes an impact in the lives of the people and in the environments visited,” said Casey Hanisko, the ATTA’s vice president of marketing and communications. “The ATTA hopes to influence operators to reconsider what they are educating their guides and travelers on before and during a trip so that each teachable moment is movement toward change. And through consistent messaging to consumers we can raise awareness beyond the elephant and ivory problem to a global wildlife trafficking issue.”

Ultimately, it is up to each individual person to help reverse the overwhelming power of this second wave of wildlife trafficking. “In a very real way, consumers hold the key to ending trafficking and helping to save the world’s most iconic species for the benefit of generations to come,” Walker said. “As WildAid’s tagline suggests: ‘When the buying stops, the killing can too.’”