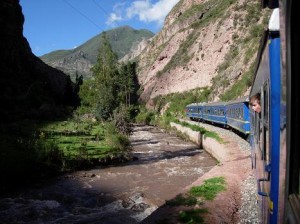 Railroad to Machu Picchu. Photo taken before the rains.

Peru Rail, Peru’s Southern Train routes service operator, has informed Apumayo Expediciones that Ferrocarril Trans Andino SA (FTSA) has announced that the railroad from Piscaycucho (Km.82) to Machu Picchu Town (Aguas Calientes) will be reopened next Monday 29th of March, if the weather conditions remain as stable as they have been until now.

Though FTSA announced a few weeks ago that this portion of the railroad to Machu Picchu was going to be reopened on April the 1st, they have realized that, as they have made extensive progress, this deadline can be re-scheduled to March 29th. This has been a great effort from FTSA engineers, who have worked over-hours to reopen Machu Picchu at the soonest.

Peru Rail is developing an Operational Plan to reestablish their train services, based on operational safety parameters which will be announced in the following days

Apumayo Expediciones stands out the efforts made by FTSA engineers and workers, which allow giving back hope to thousands of travelers that are anxious to Visit Peru’s Icon Attraction.