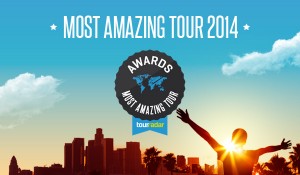 Vienna, AUSTRIA – TourRadar, the world’s largest group tour booking site, today announced the winners of the annual TourRadar Awards, naming the Most Amazing Tours of 2014 and the inaugural Guide of the Year Award winners. The awards are based on thousands of reviews submitted by travellers throughout 2014.

TourRadar launched its first awards in 2012 to highlight extraordinary trips based solely on customer feedback. All TourRadar awards are based on the quality & quantity of traveller feedback, which is then normalized to compensate for the frequency, length and size discrepancies of the tours. In 2014, TourRadar additionally introduced a new award, Guide of the Year. As guides are the backbone of every group tour, we, at TourRadar, feel it is an important addition to our awards list.

The Most Amazing Tour Award 2014 in the ‘worldwide’ category was awarded to ThaIntro – an 8 day introductory tour to Thailand for backpackers and young travellers. ThaIntro was a consistently high performing and well-reviewed tour throughout 2014; particularly among travellers between 18 – 30 years old.

The inaugural Guide of The Year Award 2014 recipient and winner of the €10,000 in prize money is Isobel Needham, a tour guide for the Busabout & Contiki brands. Isobel received hundreds of reviews that emphasised her bubbly personality, knowledge and experience in guiding a number of different tours across multiple continents.

With this new Guide award category, TourRadar is acknowledging the excellent dedication and enthusiasm that the guides give to make every traveller’s experience an incredible one. Additionally, the winning guide can nominate the charity of their choice which will receive €5,000 of the prize money, donated by TourRadar. Isobel has selected the New Zealand based charity livemoreawesome, a registered New Zealand based charity determined to find better ways to help the people of New Zealand deal with depression, a very worthwhile cause.

TourRadar will be continuing their Awards race in 2015, with travellers encouraged to leave their reviews at www.tourradar.com/review