Assistant Editor’s Note: The following article, originally titled Tourists Not Terrorists: The Middle East Can Capitalize on World Eco-Travel Trends and published in the Green Prophet, was written by Rola Tassabehji, and is re-printed here with her permission. 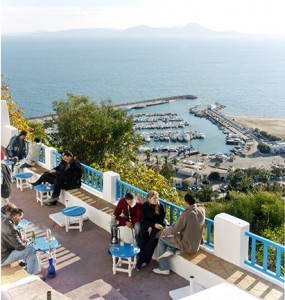 The three winners from the Middle East/MENA region are Tunisia, Bahrain and Qatar in new survey on tourism trends.

The recently released 2011 “Travel and Tourism Competitiveness”report by the World Economic Forum, in co-operation with Booz & Company, reveals some interesting dynamics in the global tourism industry, including a shift to the East, with Central and Eastern Europe (CEE) and Asia rising in rank, while sustainability continues to establish itself as a  key tourism trend. Political reality may be overshadowing any wide discourse on tourism in the Middle East. But the potential role of this industry is more relevant than ever for a region struggling with issues of heritage, identity, and community development. Here’s a brief overview of the report:

The international ranking is based on detailed analysis of key attributes such as health and safety, infrastructure, price levels, the cultural offer, environmental protection and legislative regulation. A total of 139 countries are studied, including 16 from the Middle East.

As the industry witnesses a gradual recovery, established Western European countries, including Germany, Switzerland, France, continue to occupy the top positions. However, according to the report, overall, the dynamic in the tourism sector is moving away from established regions such as Europe and North America, and towards the East. In the Asia-Pacific Region, international tourist arrivals from 2000 to 2010 increased nearly twice as fast (85 percent) as the global average (39%).

Within Europe, not surprisingly, Greece and Portugal are the biggest losers, reflecting to a large extent the impact of the economic and debt crisis, which hit both destinations particularly hard. One the other hand, Montenegro’s “while beauty” has earned it recognition as a real winner in this year’s survey. The Balkan state has identified environmental protection as a key constitutional objective and is actively supporting sustainable eco-development projects to meet growing global interest for new exotic destinations.

A nomadic herdsman drives his camels across the desert in Tunisia.

The rise of the GCC destinations in the Middle East

Only three MENA countries are included in the top 50 rankings of leading tourism destinations  and surprisingly none from the historically and culturally rich Levant region: Bahrain (2011 ranking: 40), Qatar (2011 ranking: 42), and Tunisia (2011 ranking: 47).

Although the survey was conducted before the regional unrest, already the North African destinations such as Tunisia and Egypt were falling back in the rankings, as Arab countries in the Gulf continue to invest heavily in the tourism sector.

A closer look at the survey shows in Bahrain policy rules and regulations are less supportive of the sector’s development (ranked 58th), while environmental sustainability remains a particular area of concern (123rd).

Qatar is ranked 3rd in the region and 42nd overall. It is also seen as in need of improving its policy environment and focusing on environmental sustainability (67th).

Although the Gulf countries’ heavy investment in good transport and tourism infrastructure is paying off, environmental protection sustainability still lag behind.

Significance of rankings with environment in mind

Global rankings are sometimes seen as PR tools,  oversimplified and at times politicized, but they still provide indicators on key trends and “smart growth” opportunities.

One clear winning trend is long-term and continuous investments in sustainable tourism concepts and environmental protection initiatives. Sweden, Switzerland, and Denmark—three countries holding the top three spots in the environmental sustainability pillar- are characterized by strong environmental legislation and a focus on developing the tourism sector in a sustainable way.

Also in the top 10 among countries are Austria, Finland, Germany, and Norway, all with significant policies on protecting the environment.

The potential of the Middle East

Compared to the these countries, the Middle East continues to be an economically strong growth market and is not lacking in cultural and landscape-related resources to position it in a more favorable position in these rankings. The region is also not lacking in strong affinity to tourism, particularly in places like Lebanon and Jordan.

In addition, like Turkey, these countries have the potential (provided security and safety issues are settled) to provide low-cost alternatives to traditional destinations within the reach of Western Europe.

Although eco tourism projects have started appearing in some parts of the region, including Jordan, Morocco, Egypt and Lebanon, mass tourism dominated by luxury hotels operated by mostly non-indigenous population is still the predominant model.

Compared to other emerging destinations in Africa and South America, eco tourism concept is still niche and often driven by “green washing” marketing practices. With no official certification bodies, absence of local government policies in favor of eco-tourism and a more general lack of a full understanding of concepts behind eco tourism, the potential of this sector remains largely untapped.

Meanwhile, biodiversity loss, ecosystem degradation, and a lack of understanding the value of our natural resources continues on a wide scale resulting in limited unspoiled sites. Some governments are doing more than others in terms of environmental protection and sustainability, creating new protectorates to safeguard their natural heritage. Egypt reportedly has 27 protectorates covering 15% of the country, with each preserving indigenous populations and wildlife, including mangrove trees, wetlands and whale sharks. But for many countries in MENA, it may be too late as the fragile desert and marine life continue to be exploited.

Beyond the environmental and tourism benefits of green tourism,  the WEF report stresses the “huge indirect opportunities…uncovered in the general push for sustainable low carbon cities, green building design, and green transport. Further opportunities will be found specifically in the energy efficiency retrofitting of accommodation establishments and other hospitality infrastructure, the scaling up of renewable energy sources, and improved waste management.”

Green tourism can therefore have a multiplier effect and be an important trigger for green growth across the economy, raising income and employment.

But perhaps most important of all, far from being a passing fad, smart tourism that is green, ethical, and socially inclusive touches on issues of national identity and authenticity – issues that can no longer be ignored in the Middle East.