As with Bolivia’s Uyuni Salt Flats a few years ago, the 3700m high metropolis of La Paz is getting a lot of buzz in the travel-sphere these days. From Conde Nast Traveler’s recent full-blown, full-color and lengthy article on La Paz’s ever-expanding lodging, gastronomy and arts scene to National Geographic’s reporting on the annual Dia de las Ñatitas (Day of the Skulls), it is clear that the city is no longer just a laundry stop on the way to points north and south. 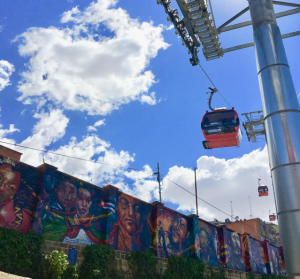 As more and more travelers are intrigued by La Paz’s fantastic topography, colorful markets, cultural diversity and truly-incredible-engineering-feat cable car system, they are spending extra time in and close to the city, seeking out new experiences and feeling confident that heading off the beaten track is safe, adventurous and, as La Paz on Foot’s trip designers explain, distributes the benefits of tourism beyond Bolivia’s classic destinations. While over-tourism might not be as big of a problem here as it is in neighboring countries, arrivals are on the rise and developing new activities and destinations now can help ensure that the impacts of too many travelers in the future are less than they otherwise might be.

Celebrating it’s fifteenth birthday this year, La Paz on Foot is doing its best to contribute to the sustainable growth of travel and tourism in the greater La Paz region by launching three new day trips in and around the city. In the past, the vast majority of guided itineraries have focused on traditional tours in the historic center and market districts with occasional forays into the high valleys that surround the city.

However, as travelers arrive with more time on their hands, the company’s founders, Stephen Taranto and Tomas Sivila, and their team of intrepid trip designers are responding by researching, planning and putting into action a trio of experiences that use La Paz as a base and include lesser known attractions in combination with the have-to-dos and as they are close to the city, travelers spend less time on the road and more time on the trails, exploring archeological sites, riding the cable cars and roaming the city streets. 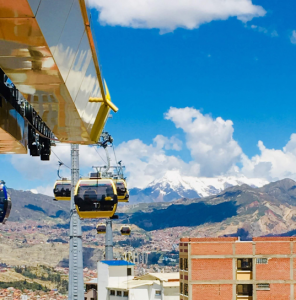 Illimani Mountain is the sacred mountain of La Paz and is revered by all as he watches over the city.
Photo Credit: Stephen Taranto

The freshly minted, full day Cable Cars & Side Streets of La Paz uses the city’s extensive new cable car systems to introduce travelers to La Paz from above. The 34km (21 miles) long system was inaugurated in 2014 and today includes eight lines and 25 stations that criss-cross the city from below to above and from side to side. But rather then just take in the scenery, La Paz on Foot’s design includes a series of hop-off activities like a visit to the Antonio Paredes Candia Art Museum located inside a former (and empty!) water tower, the quaint Andean Textiles Museum with its collection of textiles from throughout the country and even a stroll down colonial Jaen Street on the way to lunch at Manq’a, one of the city’s innovative Andean Fusion restaurants.

Further down in the valley and in partnership with Colibri Camping, a glamping spot just beyond the city limits to the south of La Paz, the Devil’s Molar-Jupapina Day-hike that descends from the Devil’s Molar, a striking volcanic plug believed to have been a way stop on pre-Colombian pilgrimage routes between Lake Titicaca and the dramatic valleys descending to the east from the 4000m altiplano. The views of the city and valley of La Paz from the craggy protuberance are spectacular and the trail offers ample opportunities for bird watching, medicinal plant observation and a quick geology lesson to boot. After a picnic lunch mid-way and a final descent into and across the La Paz River, the experience finishes up deep in the valley at Colibri Camping, a family-run campsite and spa perched on a cliff-top overlooking the valley and back up to the Molar, where hikers can enjoy a coffee or beer (or two!) and even a massage or soak in the hot tub! 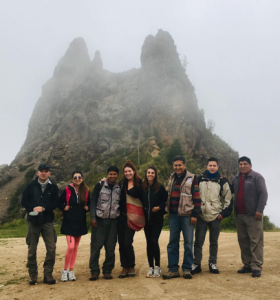 With the Devil’s Moral in the background, La Paz on Foot and Colibri Camping set off on an exploratory hike as part of their product design process.
Photo credit: Stephen Taranto

To round out the company’s new offerings and perhaps the best example of a program that brings new destinations on to traveler radars is the full-day Chiripa Temple-Tiwanaku Archeology Trail, originating and finishing in La Paz and taking travelers not only to the Tiwanaku UNESCO World Heritage Site but also to the Taraco Peninsula, just to the northwest of Tiwanaku and where the pre-Tiwanaku Chiripa Temple and Archeology Museum are located.

The Chipira culture developed between 591-116 BC BCE and its influences on the later Tiwanaku period (200-1000 BC) are evident in the design of the sunken temple and many of the tools and ceramics found during excavation and partial reconstruction. The community Taraco has developed a community-based tourism project that features the restored temple and museum, a traditional lunch and a short walk along the coast of Lake Titicaca before heading to Tiwanaku. 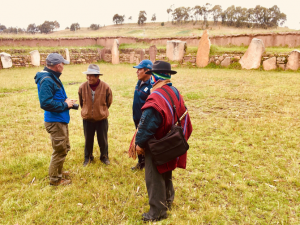 Tomas Sivila, of La Paz on Foot, speak with local authorities and guides about the excavation they helped conduct at the Chiripa temple site.
Photo credit: Stephen Taranto

“Once the new routes are up and running and our guides are trained,” says Sivila, “the next step is getting them out on the market. We like the idea of explaining to our clients that considering something different has a positive impact on the very attractions they came to see as well as the ones the new tours tours incorporate.” To be sure, it can take a while and a sufficient quantity of intrepid travelers to make new circuits sustainable in the long term but that is a part of the challenge, selling something new has never been easy but in the case of addressing over-tourism, it is a challenge worth overcoming.