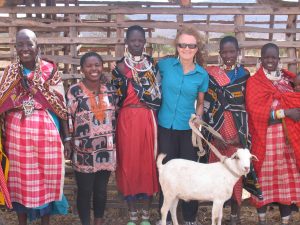 The Globe Magazine and the Commonwealth Institute recognized Judi Wineland, Thomson Safaris co-founder, in its 2016 top women-led businesses in Massachusetts list. This is the third consecutive year that Wineland-Thomson Adventures, Thomson Safaris’ parent company, has been included in the prestigious lineup.

“It’s an honor to be listed alongside such highly regarded corporations, and I’m delighted that Wineland-Thomson Adventures is being recognized for its female leadership,” said Wineland. “The adventure travel industry was largely male-dominated in 1981 when Thomson Safaris was started. Since then, we’ve helped tens of thousands of guests make lifelong connections and memories in Tanzania, and that’s the greatest success of all.”

“Year after year, this recognition encourages us all to continue supporting Tanzania and connecting guests to this beautiful country,” she said.

About the award: For the past four years, The Globe Magazine and the Commonwealth Institute have worked together to compile their annual list of top women-led businesses in Massachusetts. They took into account companies’ innovative projects, operating budget, workplace diversity, number of full-time employees in the state, and other factors to determine their lineup.