In November 2017, the Associated Press reported that climbing on Uluru, Australia’s sacred monolith rock also known as Ayers Rock, would be banned beginning 26 October 2019. The park’s board made the decision in 2010 to ban the activity if interest declined and visitors were drawn to other activities. According to Parks Australia, only 16% of visitors climbed the rock between 2011 and 2015, a sharp drop from 74% in the 1990s.

Yet, as the date of the ban draws near, a number of news sources including the New York Times and the Guardian have reported tourists are flocking to the site. As noted in both articles, the park saw a 20% increase in visitation due at least in part to more direct flights from Darwin and Adelaide to the region. Nonetheless, headlines for both of these news stories focus specifically on Uluru’s climbing ban as the reason the park has seen a surge in visitation, a phenomena known as last-chance tourism. 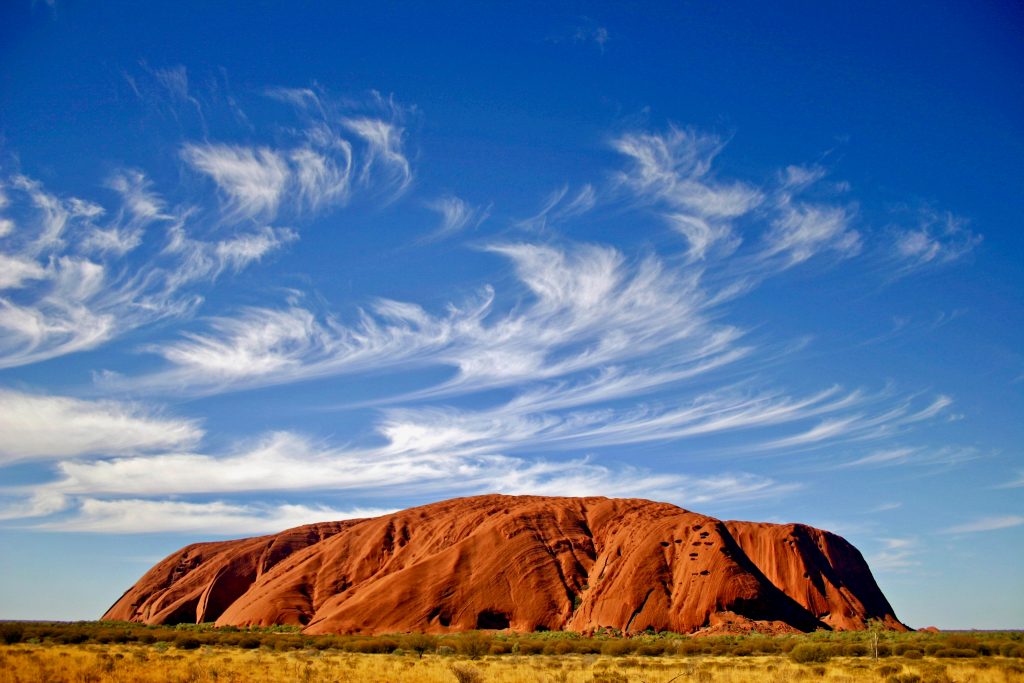 Uluru is sacred to indigenous Australians and is thought to have started forming around 550 million years ago.

Without asking visitors themselves whether Uluru’s imminent closure influenced their decision to climb it now, it’s impossible to correlate the park’s increased visitation numbers with travelers’ motivations. Yet, a 2016 study published in the Journal of Sustainable Tourism found that nearly 70% of visitors questioned about their motivations to visit the Great Barrier Reef were “strongly motivated” to see the Reef “before it’s gone,” so there is evidence destinations’ uncertain futures are a compelling reason for people to visit them. Regardless of whether a specific correlation can be made or not, the spotlight on Uluru and the way popular media has reported on it over the past several months highlights the growing phenomenon of last-chance tourism and how reducing a destination into alarmist sound bytes by popular and social media can have adverse consequences.

Ultimately, it doesn’t matter why a destination or site is at risk of destruction or closure, but publicizing its demise triggers a psychological desire to visit. Yet, not openly discussing solutions to mitigate threats to endangered destinations around the globe is ignorant at best and dangerous at worst. To understand how to bring awareness to and discuss what is happening to endangered destinations, it’s important to understand what is driving the last-chance tourism trend.

In August 2010, a study published in Current Issues in Tourism noted concerns over vanishing destinations including the Great Barrier Reef, Everglades, Maldives, Galapagos Islands, the ice cap on Mt. Kilimanjaro, and the polar regions prompted some tour operators and agencies to recommend that travelers visit these destinations before they disappear. These concerns date back well over a decade, yet it’s become a mainstream trend running parallel with the climate crisis over the last couple years.

The desire to visit, see, and experience a place at risk of vanishing has compelling social and psychological roots, yet participating in last-chance tourism can perpetuate the very conditions that led to the destination’s tenuous condition in the first place.

By now, it’s old news that overtourism is a global problem. In fact, many destinations have closed or restricted access in order to manage the overwhelming number of tourists that crowd beaches, city streets, and historical sites. Earlier this year, Peru implemented a four-hour visitation limit to Machu Picchu. Thailand’s Maya Bay and Boracay Island in the Philippines both closed to visitors to help the destinations recover from overtourism’s effects. And city destinations like Venice, Rome, and Amsterdam have implemented visitation fees, stricter laws, and management strategies to address structural and cultural damage and tourists’ inappropriate behavior. 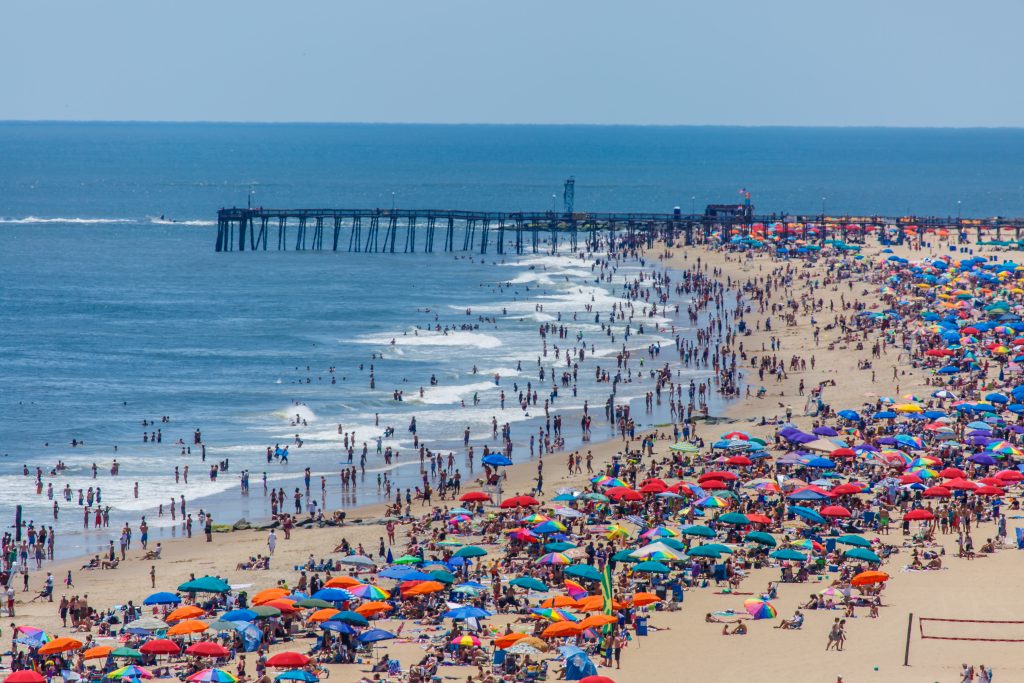 The world’s most cherished places are at risk of being visited into oblivion.

Some of these destinations are also bumping into the last-chance tourism trend. Venice, for example, is expected to succumb to flooding before 2100 due to global warming, as are many other coastal destinations. At Machu Picchu, visitors were recently given limited access to areas of the sacred site to curb degradation due to human foot traffic. It’s bad enough that travelers seek these destinations out during these particularly sensitive and strained final days. Perhaps more unfortunate is that cruise companies, popular media, travel vendors, and tour operators contribute to the problem by packaging these destinations and experiences by marketing their precarious future as a reason to visit now.

For example, Stride Travel, a JetBlue Ventures-backed multi-day travel and tour marketplace, recently curated more than 400 trips in a specific category called “Places Disappearing Due to Climate Change.” These trips each visit one of the 10 destinations it has decided are critically threatened by climate change, which include Greenland, the Dead Sea, Patagonia, and the Great Barrier Reef. In communication with the company, I was assured only destinations impacted by “macro factors” like global warming were included on the list and not those impacted by overtourism, yet Venice also made the list. Stride notes it “takes a stand for responsible travel” by committing 10% of its net revenue to organizations helping to mitigate climate change in these destinations and across the world from eligible trips reserved on this list when travelers opt-in.

“The reality is that people aren’t going to stop traveling — human curiosity and the urge to explore is innate, and we think it should not be stifled, but we also know there are ways to travel sustainably and give back while doing so, said Stride Travel’s founder and CEO, Gavin Delany. “As part of the climate change awareness and Stride Gives Back program, we provide icons on our website to inform travelers looking for trips that visit places that are negatively impacted by climate change, which can be an important part of the decision for some travelers. It’s a subtle but ongoing and influential reminder of the importance of climate change and its effects.”

Why Does Last-Chance Tourism Work?

Stride Travel is not alone in taking advantage of the last-chance tourism trend. Eager to rise to the top of Google’s rankings, many top-tier publications have published lists of places to visit before they disappear as well. But there’s a reason these lists are appealing and tours touting “last-chance” experiences sell.

An explanation of why last-chance framing works can be linked to the psychological phenomenon known as loss aversion. It is associated with people’s fear of missing out or losing something — in this case, the chance to visit a certain place of interest. “Loss aversion is a very powerful mechanism that can strongly influence people’s decision making. It makes people twice as likely to travel to a place that might be disappearing or might be put out of reach compared to a place where they are making a positive impact with their trip,” said Milena Nikolova, the Adventure Travel Trade Association’s (ATTA) director of knowledge and AdventureEDU. “Loss aversion is so powerful that it is often woven into nudges designed to help patients follow their medical treatment or facilitate more responsible financial behavior.”

Psychologically, people react more strongly to a situation when there’s a risk of loss than when there’s a chance for gain. In a lab setting, this means people would rather not lose five dollars than gain five dollars. In the travel industry, this means people would rather visit a place they might not have the chance to visit in the future rather than visit a destination that is equivalent in essentially all other ways except for the fact that it is not in immediate danger of disappearing.

Given this psychological pull, perhaps it’s no surprise that “go before it’s gone” messaging is particularly effective. However, there’s also an unintended effect for those trying to use counter-messaging — that is, don’t visit because this destination is disappearing.

For example, Fodor’s publishes an annual “no” list that advises travelers to avoid particular places for various reasons in the coming year. Phang Nga Park, Thailand, and the Great Wall of China made the list in 2018. Fodor’s included Boracay, Maya Beach, and “places that don’t want you to visit” due to overcrowding, such as Amsterdam, Venice, Santorini, and Dubrovnik, on its 2019 list. While mindful travelers might take these words and warnings to heart, many others don’t view themselves as the ones “causing” the problems with which these destinations struggle. Instead, drawing attention to these destinations puts a target on them as “must visit” destinations before they become “too ruined” to visit. It also adds a sense of urgency so an increased number of people want to visit right away, which artificially fuels overcrowding.

Talking About The Problem

Avoiding conversations about overtourism and destinations in dire straits is irresponsible. These are urgent and important issues the travel and tourism industry needs to take seriously, but how can we talk about destinations suffering from last-chance tourism without doing more harm?

Those working in the travel and tourism industry and popular media are in a powerful position to take a stance when it comes to last-chance tourism. Talking about the phenomenon and the damage it causes to the environment and local communities helps establish the practice as an undesirable social norm. With this negative stigma of last-chance tourism established, destinations are empowered to prohibit or curb tourism, and tourists are both unable and disinterested in being associated with it.

If it sounds unrealistic to turn the tide of travelers back from Uluru, the Great Barrier Reef, and other endangered sites, consider a similar example of visiting establishments where animals are held in captivity or used in touristic activities. Not so long ago, it was considered acceptable to swim with dolphins, visit petting zoos, and ride elephants. Spreading awareness and education about the danger these establishments and activities present has led to a massive backlash to this kind of traveler experience. Many tour companies now refuse to work with companies offering these experiences, and even TripAdvisor has removed activities that put marine wildlife in danger.

The same thing can happen with last-chance tourism. Instead of taking advantage of increased interest due to destinations’ fragile circumstances, the industry needs to be vocal about why taking advantage is wrong. Those working in the industry need to set the standards of right and wrong, and emphasize this until it becomes common practice and universally accepted. Travel professionals everywhere need to talk about last-chance tourism not as an opportunity to “go before it’s gone,” but to make clear why it is irresponsible and dangerous for people to do so. Not doing so may result in irreversible damage to precarious destinations around the world.

3 Comments to There’s a Reason Why Last-Chance Tourism Happens, But We Still Need to Talk About It