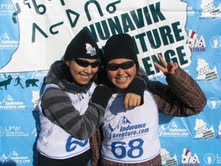 Quebec City, Québec – The first Nunavik Adventure Challenge International will take place from March 25 to 28, 2012, near the village of Kangiqsualujjuaq, which borders the beautiful parc national Kuururjuaq. Nunavik is a vast territory the size of France, with a sparse population of barely 12,000 people – mostly Inuit – who thrive in one of the most challenging climates on the planet.

This event is a once-in-a-lifetime experience for endurance athletes and a tribute to the Inuit and their ancestors who have made this land their home for more than a thousand years. Teams of two from South Africa, Italy, France, the United Kingdom, the United States and Canada will come to compete, not only to push their personal limits, but also to immerse themselves in the beautiful landscape and rich Inuit culture that Nunavik has to offer. With the towering Torngat Mountains serving as a backdrop, teams will test their skills at backcountry skiing, snowshoeing, winter-trail running, mountaineering, ropes activities, snowboarding and

orienteering. Competitors will also have to camp out on the tundra as a part of this exciting three-day adventure race designed to test the endurance of even the most intrepid explorer.

This premier international event is the direct result of a rather innovative and successful tourism development project that was initiated by the Kativik Regional Government with the financial backing of the Ungaluk Program for safer communities. As featured on ESPN (US), Sky TV (UK), and Montagne TV (France), the Nunavik Adventure Challenge was created in partnership with Endurance Aventure as a tourism training and development initiative that provides a comprehensive framework in which community tourism capacity is developed through a holistic and integrated program. Many Nunavimmiut of all ages have participated in 16 events held in six different communities over the past three years, and the participation and enthusiasm for this program has been overwhelmingly positive from everyone that has been involved. 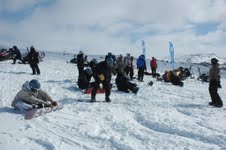 More than 20 Nunavimmiut have achieved industry certification that qualifies them as instructors or technical staff, and combined with their local expertise, these individuals play an integral role in the coordination of these races. The village of Kangiqsualujjuaq is proud to be hosting an international event of this calibre, and as an added element, they have hand- selected two local teams of Nunavik youth to challenge the visiting elite international athletes.