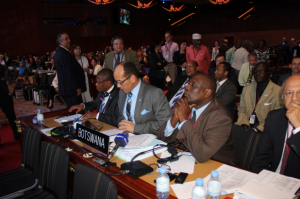 BOTSWANA – The Okavango Delta was inscribed as the 1,000th UNESCO World Heritage site during the 38th Session of the World Heritage Committee (WHC) being held in Doha, Qatar, on Sunday 22, June 2014. This was announced yesterday at a Press Conference in Gaborone.

The Okavango Delta inscription came about in fulfillment of the UNESCO listing criteria due to its unique hydrological event (Criteria IX. Outstanding Ecological Biodiversity and Hydrological Processes): as it is one of the few inland deltas that floods in the dry season, busting into an oasis wonderland during the harsh, dry and dusty winter season. In addition, the vast natural scenic, alluvial systems from which the waters never reaches the sea, but drains into the desert sands of the Kalahari basin and extensive Makgadikgadi Salt Pans. Moreover, the outstanding example of ecological and hydrological process supports diverse forms of life including 1000 species of plants, 130 species of wildlife, 480 bird species, 90 species of fish as well as a host of reptiles, invertebrates and amphibians. (Criteria X. Protection of threatened and endangered species) Thus, the Okavango has become the core habitant for many threatened and endangered species, which includes wild dog, cheetah, lion and sitatunga antelope. (Criteria VII. Exceptional beauty and aesthetic importance). This dynamic ecosystem has truly become a true wonder for the world to marvel at, thus, constituting for its inscription

In accepting the UNESCO inscription, the Minister of Environment, Wildlife and Tourism Hon. Tshekedi Khama said;

“Madam Chair, let me assure you that the government of Botswana is committed to the protection of all its natural and cultural heritage, regardless of whether it is a World Heritage site or not. We therefore assure the committee that we will continue to work with relevant stakeholders, most importantly the communities living in and around the Okavango Delta, and the riparian States of Angola and Namibia to maintain the integrity of the Okavango Delta. Most importantly, let me thank the people of Ngamiland for taking care of the Okavango Delta, their participation and support in the nomination process and assure them that government will continue working with them to maintain the integrity of the Okavango Delta and ensure that they benefit from it.”

As part of the celebration for the inscription, The Minister hosted an exhibition and reception in Doha to honor this milestone of the 1,000th UNESCO WORLD HERITAGE SITE.