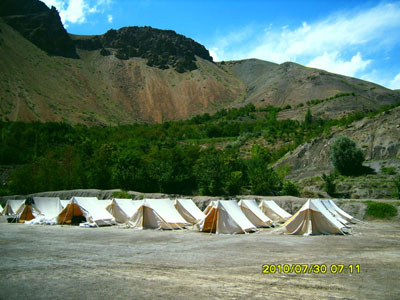 The tent village at Gahli stadium for the displaced people

Editor’s Note: The following first-hand account about the flooding situation in Pakistan was submitted today from ATTA Member, the Chitral Association for Mountain Area Tourism, and published to give tourism professionals a glimpse of extent of the disaster.

Booni is a village 80 kilometers to the north of Chitral town. Just like the rest of the villages in the Hindu Kush region, Booni is also a fan-shaped landmass formed by glacial deposit at the mouth of what is called ‘Booni Gol’ or the stream of Booni, which cultivates the tracts of crops, vegetable, fruit bearing trees of apple, pear and grape and so on.

On July 26, 2010 in the afternoon, a huge flash flood that originated from Booni zom glacier, smashed road networks, telephone and water supply lines depriving the local communities of the basic life amenities. The jeep-able road that once connected Central Booni to Molgram in the south vanished in a flash and the blacktopped road cleanly swept. The proportion of the flood was so immense that the wide span of the stream course could hardly accommodate it. Consequently, the overflow entered the settlements destroying houses, orchards, and washing everything on its way including a Jamat Khana. The irrigation channels branching off the main stream have been badly disrupted. This has left standing crops of rice, maize, and fruit bearing trees, orchards, and kitchen garden without water for more than a week, the cost of which for the locals, who largely depend on subsistent agriculture for their livelihood, could be immeasurable. 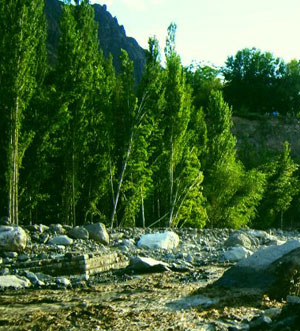 The topography of the post-flood Booni Gol presents an unattractive and unacceptable look. The green patches of crops/grasslands and the leafy overhanging trees that once decorated the line of the stream could be seen uprooted. This also means the life-time fantasies of the locals woven into the serene beauty of the stream have also been washed away by the worst natural calamity of our time. You will find the grief-stricken villagers standing at the edge and fearfully gazing into the abyss of the flood bed pondering over the factors that provoked the disaster.

It would be pertinent to mention that global warming-related flash flood have become a commonplace in the Hindu Kush mountains. Four years ago, the village of Sonoghor was totally destroyed whereas Brep—another village in the north—was partially plastered. Still in another instance, forty people in the Washeech village of Torkhow valley were died when an unusual snow avalanche buried them in a harsh winter of early February.

The socio-psychological trauma of the flood for the local communities has been enormous. The entire population was panic-stricken when they knew about the natural disaster being unleashed. Obviously, the trouble of those living near the epicenter of the flood was pathetic. Ladies ran amok with their children pressed under their arms. Young daughters just engaged in collecting household utensils and tending livestock into safe places. Male family members started running with valuables whatever their hands could lay on in the premises of the household. In no time, then, a large number of displaced people reached at Gahli playground, embarrassed and grief-stricken. They preferred to stay under the open sky in a torrential rain for the sake of their life. Many of them took refuge with relatives and family members in the nearby villages.

The next morning tent village for the affectees was established at Gahli stadium across the river right in front of the village. Some people still prefer to have night stay in these tents to avoid the risk of being washed along the flood. To add salt to injury, the community was advised to remain cautious and alert after the aerial survey of the hazard-prone glacier by a team of experts.

In the meantime, the police and volunteers from the local community have been inducted in the upper region with a mission to send early information in case of another bout of flood, which is perceived to have been lurking somewhere in the glacier.

Till now no aid package has been arranged by government and non-governmental organizations. There is wide spread possibilities of cholera, typhoid and malaria and other water-born diseases. The road links leading to the Chitral district and Booni have been cut-off, which means there is rampant price-hiking for the locals in the month of Ramadan.

To read more news about the flooding in Pakistan, access an update from the Associated Press: click here.