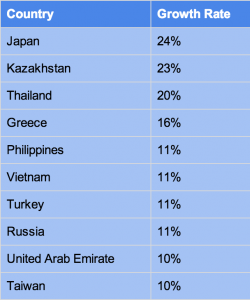 A five percent increase in international travelers in 2013 meant the number of globe-trotters broke a record, pushing 1.1 billion.

While the United States, France and China still lead the way in inbound travelers, some fresh destinations are on the rise globally, and they are swiftly moving up the ranks. With double digit growth in arrivals in 2013, see the top ten fastest growing international destinations at the graph to the right.

A weakened yen (down 20 percent compared to the dollar last year) partially explains Japan’s rapid growth. According to Bloomberg News, Japan was set to break its tourism record with 10 million visitors in 2013, showing remarkable resilience after the 2011 earthquake and nuclear disaster.

You might be surprised to see Kazakhstan heading up the list in second place — the country is receiving more visitors due to the significant increase in outbound travel from neighboring Russia and China, according to the U.N. World Tourism Organization. 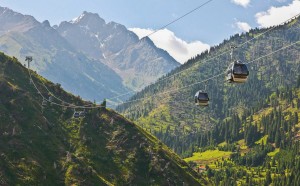 The entire region of Southeast Asia saw 10 percent more arrivals last year, so it’s no surprise to see Thailand, Vietnam, Taiwan and the Philippines on the list. Read more on the growth of Asia inbound and outbound travel.