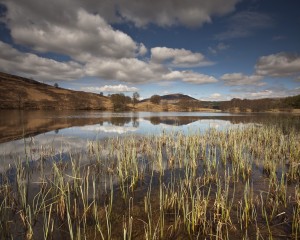 The East Highland Way Guidebook is hot off the press, with its revamped website hosting detailed maps and info allowing walkers to explore the route successfully for the first time since its development in 2007.

The East Highland Way was developed in 2007 by Kevin Langan, based on the theoretical concept of creating a new route through the highlands which links three of Scotland’s already well established long distance trails. The name is derived from the fact that the route terminates in Aviemore at the eastern edge of Highland region. The project’s conceptual strength relied on various strategic factors. Importantly, it forms the new link route between the northern end of the West Highland Way with the southern end of the Speyside Way, engaging with the Great Glen Way at its southern point in Fort William. This newly identified path network forms a new coast to coast route, between Loch Linnhe and the Spey Bay at Buckie. The route connects two towns already entrenched in mountain sports culture with Fort William being widely recognised as the outdoor capital of the UK, and Aviemore for its proximity to the monolithic Cairngorm plateau and ski centre.

The contrast in natural habitats along the route provides the East Highland Way with a distinct character. The journey passes seamlessly through enchanting broadleaf forests, loch-side trails & quiet mountain wilderness. It skirts unspoilt marshlands and also explores the last remnants of the ancient Caledonian Pine forests of Inshriach.

The route has been optimised to engage with accommodation where possible, making it more accessible for walkers of all abilities. The route explores some of Scotlands best historical attractions, passing close to Old Inverlochy Castle, the Pictish Fort Dun da Lamh, Ruthven Barracks and the stunning island castle of Loch an Eilein.

The routes originator Kevin Langan is an experienced mountaineer and long distance walker. He developed the East Highland Way during the winter of 2007 and continues to improve and promote the route with the aim of establishing it as a leading UK distance route.

With his involvement in large-scale commercial planning projects coupled with his experience in developing award-winning outdoor products, the EHW presented an opportunity for Kevin to combine his passions.