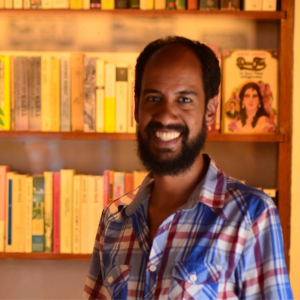 This past October our Caminhada São Paulo Negra (Black São Paulo History Walk) tour was followed by two police officers. Our 12 guests were on a walking tour, hearing the stories and seeing the sights of the history and culture of Black people in the city, and in Brazil. The officers said they were pursuing us because our group of mostly Black people gathered together talking about the Black history of Brazil was reported as a protest, and they were ordered to follow us to protect the public from a potentially dangerous situation. We were embarrassed and intimidated while working, yet the tour went on, and our guests (who had paid R$60 to be there) were listening to stories of structural racism while also experiencing it first hand. Simply put, tours of white people who tell white stories would not be perceived as a protest like ours was.

After the incident I lost sleep for days, feeling anxious and afraid every time I saw the police on the street. We ultimately decided to go to the racial crime station to report the incident, and inquire out about the report and order to follow our tour. The staff at the station (who were all white) were not receptive to our inquiry, and they claimed to have no record of the order or the incident.

The media picked up on the story and it received a lot of attention in the press, which helped us see this as an opportunity to educate and advocate by bringing the police closer to what we were doing. We decided to offer a class to the police, and an opportunity for them to go on one of our tours.

They accepted. In December 2020, we held that class and tour. 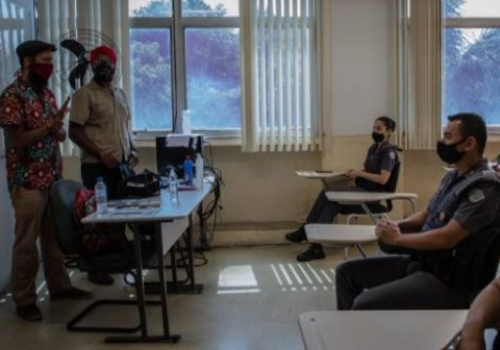 Though the class only lasted 20 minutes (with no time for questions, though we tried), I was able to share the history of the arrival of Black people in Brazil: forced to work as slaves, and treated as goods. In the 18th and 19th century after the Vadiagem Law, free Black people living together in settlements (quilombos) were criminalized and persecuted, as have been our cultural practices throughout history: Funk, Samba, religions of African origin, and capoeira. And it continues even today, as in the case of our Black history walking tour.

I talked about how for every ten people killed by police, seven are Black. Everything that is Black is questioned, suspect, or persecuted, and it is neither a coincidence nor a misunderstanding. It is structural racism, a bias in the way society and portrayals in the media condition us to see and judge people by the color of their skin. A Black person running, for example, is more likely to be seen as suspicious than motivated by something more benign, like running to catch the bus. This bias seems obvious, but it is not because it is often unconscious, which is why it needs to be explained and repeated until it is understood.

I reiterated that Black people together can and should be on a historical sightseeing tour to value, center, and learn about Black history, culture, and the African diaspora in Brazil. Afrotourism is growing every day. I looked into their eyes as I spoke, and though some looked away in discomfort, I hope that at least one understood the vision enough to result in changes that will reverberate so that Black people will not feel their existence questioned or have their legitimate work constrained. So that we can be on the street and use public space without causing discomfort or eliciting suspicion. So that we can be who we are and function as citizens who are being protected–rather than pursued–by the police.

In the end, the superior police colonels exchanged smiles, handshakes, gestures, and sentiments about how open they are to actions like this. They addressed the incident and ones like it as mistakes made by few, and how this kind of bias was something of the past. Unfortunately, however, we know this is not reality.

Teaching this class was not an easy mission, but we don’t consider ourselves brave for it. The brave ones are those who fought against enslavement, those who fight every day to survive, and our mothers who raised us. Yes, we were nervous. My fellow teacher Heitor Salatiel’s nervousness made him uncharacteristically sweat and stammer as he delivered his brave and powerful message about having witnessed the police assault Black people living in the suburban periphery of the city. Black Bird Viagem tours will be conducted in these areas next year, and we want to be respected there as well, though we know that the police approach can be even harsher towards Black people in the suburbs.

The class was historic, though. It was intense and necessary racial literacy for a historically racist institution. 2020 really is a historic year in the long journey and progress of anti-racism work and racial literacy.

We hope to continue this exchange and open dialogue. We want the strong and powerful history that we share on our tours–which has been denied and deleted–to become increasingly well-known. We want to educate in schools, in the media, in companies, in the government, and the police so that all citizens see the value of the Black history, narrative, struggles, and achievements and how this story belongs to all Brazilians. São Paulo Negra, in fact, is the history of São Paulo.

We don’t want to resist, we want to exist happy. Yet racism is like a brand, a stamp, a tattoo. You can perhaps see and feel this pain as you read this story, and how we carry it with us. But we also carry our ancestry and our cultural wealth, and we strive to keep our stories alive. That is our mission. São Paulo Negra continues its journey to provide a unique and transformative experience.