Editor’s Note: This article is reposted with full permission from Matador Network. You can read the original article here: The Birth and Death of a Tourist Hotspot 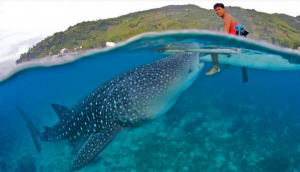 The Whale Shark is slowly swimming 25 yards from the boat — a shadow in the clear, warm water. The German guy is the first to see it; he leaps to his feet and shouts, “Butanding!” The word sounds ridiculous with his accent, but we all crane to see. Jesus Christ, it’s huge! 10 meters at least! I’m the first in the water, beating my fins to catch up to the beast. It regards me with an aloof gravitas, and I paddle alongside it.

I shared this fantasy with Aya when I arrived in the Philippines. “Donsol? Ugh,” she said, taking a drag of her cigarette, “skip it and avoid the disappointment.”

The whale sharks of Donsol were discovered in 1997, and they may as well have been giant floating bags of money. Resorts opened doors. Fishermen became “Butanding Interaction Officers.” Donsol evolved from a tiny fishing village into the kind of place where the most bourgeois businessman can high-five the dirtiest backpacker after a dive (before discreetly wiping off his hand, of course). Really, the only question about visiting was how the hell nobody thought to do it before ’97.

And yet, all I heard was, “Don’t go. Avoid the disappointment.”

As it turns out, the promised experience that inspires grandiose fantasies in excitable travelers hasn’t been happening the past few years. Boats have gone days, even weeks, without seeing a single butanding. And the word’s spreading: Foreign visits are going the way of the whale shark.

“If I wanted to pay crazy prices to sit on a boat and tan, I’d go to Miami,” was the phrase Aya used, “but I hear Oslob has whale sharks if you’re set on it. It’s Donsol five years ago.”

Such is the life and times of the modern tourist hotspot. They can get sick. They can die. It takes a lot of maintenance to keep an attraction healthy, unless it’s already hundreds of years old, at which point the dilapidation becomes part of its charm. Before then, it’s a mad game of nuclear escalation between the locals building money pits and tourists trying to cram their cash down the locals’ throats.

When the first day-tripper stumbles on an untarnished bit of provincial fun, it begins. A trickle out of a crack in the dam. The undeveloped (but adorably so) days in which a few people stumble upon something amazing and say their “ooohs” and “aaahs.” They’ll snap a quick picture to show their friends before tucking it back in an album. Years later, they’ll snap their fingers and try to remember the name of the town where they saw that waterfall. Some of the best spots never leave this stage, being too far or too difficult to reach for the average traveler. These are spared the ravages of commercialism.

Word-of-mouth leads to word-of-keyboard, where the phrase “hidden gem” is thrown around so often you don’t know if you’re visiting a secluded beach or a diamond mine.

But then come the reviews. Word-of-mouth leads to word-of-keyboard, where the phrase “hidden gem” is thrown around so often you don’t know if you’re visiting a secluded beach or a diamond mine. And like any gold rush, there are always more miners than spoils to be had.

Under this kind of pressure, a hotspot decides what it will become. One day, it’s a quaint fishing village offering an “authentic encounter with one of nature’s gentle giants.” The next, it’s a tourism machine where everybody and their sunburnt mother lines up to buy a t-shirt with a cartoon whale shark giving a thumbs up to the plebes back home unlucky enough to miss out on the fun.

Some places can handle the stress, inflating like a hot-air balloon with fires of ego, validation, and profit. Eventually, they can graduate into the ranks of the Angkor Wats and Eiffel Towers of the world, with offspring tourist spots capitalizing on their proximity. Maybe they’ll earn a UNESCO World Heritage Site designation for their trouble.

But some places can’t handle the stress.

These moody teenage years are where an attraction is most at risk, where death is always just around the corner. Maybe it’ll be murder. A nearby beach could get its act together with palm trees just a little bit greener, sand a little bit whiter. A town’s main attraction could close, forcing its visitors to leave dejected. Anything can happen. The next hip spot is the most fearsome killer, hiding in the shadows of obscurity, ready and waiting to strike at even the most established attraction, leaving it naked and wallowing in filth like a washed-up child star.

Vang Vieng in Laos is the poster child for such “locicide.” It built an entire economy on drunken tubing down its arterial river, only to have the government ban the practice, slashing that artery open and letting the town bleed out. Now it struggles to find a way to make money off the few tourists trickling through, ignorant of the ban.

A place can also be killed from within, like an infection. A cancer. It grows faster than anybody can keep up. The tourists flood in looking for the intimate experience their friends told them about, only to find thousands of others looking for the same. The locals can try to adapt, but far too often this results in the trampling of what made them attractive in the first place. They adopt a chameleon culture based on whatever the tourists want them to be. They are literally loved to death.

This is what the Full Moon Party of Thailand has become. In its efforts to cash in on the excitement, Koh Phangan has destroyed any semblance of an individual identity, becoming all pomp and circumstance: fire shows and cheap buckets of booze. That’s not to say Europeans looking to get drunk on their gap year have stopped flooding to the island every month, but then again, Lennie kept his puppy long after he accidentally broke its neck.

Donsol, in the middle of its teenage years, is the victim of both. It’s being murdered by competition at the same time as an infection decays it from within. The name of its murderer is Oslob, Cebu; the name of its disease, global warming. With the rising temperatures of the nearby seas, the butanding are avoiding the bay in favor of cooler waters, leaving the town with an infrastructure overgrowing its product. Without the whale sharks, there’s simply not much else to bring people in.

Meanwhile, the boats of Oslob have realized that the butanding stick around to feed — and they’ll stick around even longer if you provide the food. Ethics of disrupting the whale sharks’ migrations aside (or how long this will extend Oslob’s own life expectancy), this method keeps the fish around. Donsol will need to adapt to keep up. If it doesn’t, it will wither away and perish.

When the infrastructure is built upon a commodity that isn’t sustainable, it crumbles.

What happens to a hotspot when it dies? Koh Phangan does okay for itself even if many tourists looking for the “authentic experience” like to turn their noses up at the idea of visiting. But Donsol has become accustomed to having tens of thousands of visitors per year. What happens when the resorts don’t fill up anymore, when the Butanding Interaction Officers go back to being regular fishermen?

Donsol could very well find a life after death. A hotspot heaven of peace and quiet, where everybody is fine beyond the veil of obscurity. Those extra boats find new owners, the resorts find new draws from those looking to get off the beaten path. When a whale shark does find its way to the surface, a fisherman regards it in passing, like old friends who don’t speak anymore for lack of common ground. Life goes back to normal, as it existed for all the years before that one diver in 1997 decided to take a video camera into the water with him.

But that probably won’t happen.

There are far too many ghost towns out there. Far too many places that have been chewed up and spit out by their flash-in-the-pan time as a “must-visit.” When the infrastructure is built upon a commodity that isn’t sustainable, it crumbles. A corpse community. Some, like Koh Phangan, become zombies – dead inside but with enough income to afford the brains of the living. The rest, like Vang Vieng, shrivel into a shell of their former selves, holding out a shaking, emaciated hand and begging for the scraps of their replacements.

And there will always be replacements. New white-sand beaches that promise the authenticity the current ones just can’t quite match anymore. It’s a vicious cycle, and no place is immortal. The whale sharks leaving Donsol aren’t the killers or the victims. They’re just ahead of the curve.

1 Comment to The Birth and Death of a Tourist Hotspot