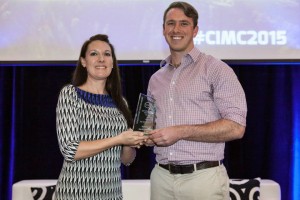 Victoria, BC-based Tartan Group received the award for “Best Integration with Offline Marketing” at the inaugural Canadian Internet Marketing Awards, held in Squamish, BC from March 28 – 29, 2015.

Dozens of creative agencies from across the country submitted their best work from the past year, including creative and innovative campaigns, which were judged by the event sponsors, Search Engine Land, and Marketing Land, two leading industry publications.

The campaign that Tartan submitted was created for their client, Quito Turismo, who wanted to establish an email newsletter database that focused on adventure travellers. Tartan developed a contest to give away an all-inclusive trip to Quito that was promoted through social media and in on-the-ground locations throughout North America. Tartan brought in multiple partners to assist with prizing and promotion including, bicycle apparel company, Timbuk2; LAN Airlines; and Intrepid Travel. The campaign was supported by a series of press trips and sponsored bloggers who were covering the Adventure Racing World Series in Ecuador. The resulting campaign generated more than 53,000 customer leads for Quito Turismo and its partners and was the most successful campaign that Timbuk2 has ever run.

“It’s an honour to be recognized among our peers, especially at an industry event like this,” says James Anderson, communications and digital strategy for the Tartan Group. “We know that we develop incredible integrated campaigns for our clients and we’re very proud of this campaign. The power of traditional media campaigns is massive, and an online campaign can be even bigger, but when you combine the two to create a truly integrated campaign is when you will see exponential growth.”