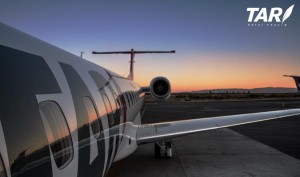 A long-awaited option after Mexicana closed, the new Mexican carrier TAR Airlines began operations last month. TAR is based in Queretaro (only 45 miles from San Miguel Allende) and connects Monterrey, Guadalajara, Puerto Vallarta, Zihuatanejo, Acapulco, and Durango. Especially exciting is the Vallarta and Zihuatanejo routes which allows convenience to combine a colonial destination with the beach.

On March 14, 2014, the clear dawn of Queretaro set the scene for one of the most important moments of aviation in Mexico. After three months of planning, effort, and team work, TAR Airlines began their operations with flight 001 with destination to Monterrey, Nuevo León. Promptly at 6:40am, authorities including Queretaro’s Secretary of Tourism, Secretary of Sustainable Development, and General Director of Queretaro International Airport were present as Executive President of TAR Aerolíneas, Luis Humberto Gómez Terrazas, delivered a brief speech sharing his enthusiasm and appreciation to the first passengers aboard the airline, ” Today TAR launches a flight to offer a service with a fair price and to connect the cities of Queretaro, Monterrey, Guadalajara, Puerto Vallarta, Zihuatanejo, Acapulco, Durango, Los Mochis and Tampico.” He also shared the good news that in the second half of this year, the airline will be flying from Toluca.

A few words by Mauricio Salomón, Secretario de Turismo de Querétaro, followed, ” Today, the queretanos will have more opportunities to travel thanks to the connectivity that TAR offers”; and without further ado, passengers walked up the ramp toward the platforms to enter the first commercial flight of the airline.

For Tar Route, see the complete post here: TAR Aerolíneas – New Regional Airline in Mexico. For other information and flight  news/connectivity in Mexico, visit our  blog.