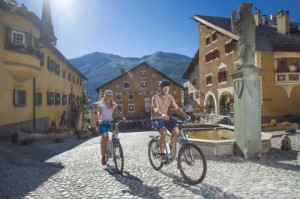 Americans love to travel to Switzerland. Recent arrival and overnight statistics for Switzerland from the U.S. are proof for that. The number of nights Americans spent in Swiss hotels in the summer season of 2014 – from May through September – shows a growth of 5.6% compared to the same time frame in 2013.

“We’re very pleased to see that most of the recent growth in U.S. travelers to Switzerland was recorded at the top leisure destinations, including many towns and resorts in the Alps or the Alpine foothills. Increasing numbers of river cruise passengers who decided to extend their cruise in Switzerland, as well as a strong showing of the affluent part of the market, contributed to these impressive growth rates”, says Alex Herrmann, Director Americas of Switzerland Tourism.

These numbers support a positive trend that has been developing over the past four years. Since 2010, Switzerland has been able to report an increase in overnights from the U.S. every year, from roughly 1,400,000 to almost 1,600,000.