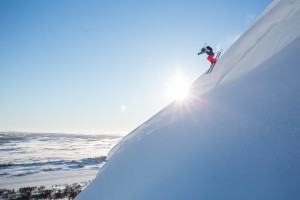 In March 2015, the flagship brand of Portland, Oregon-based Columbia Sportswear Company, partnered with Jämtland Härjedalen Tourism to host outdoor journalists from the U.S., Canada, and Great Britain for unique gear testing experiences in the Swedish region of Jämtland Härjedalen. Demanding Scandinavian winter conditions provided the perfect setting for journalists to test Columbia’s latest collection of sportswear, outerwear, and footwear. It turned out to be a rewarding week of thorough gear testing, over numerous session of skiing in the Swedish wilderness, fat biking, natural ice skating and night walks on snow shoes.

The Adventure Travel World Summit 2014 in Ireland created a successful co-operation between the Swedish tourism organisation of Jämtland Härjedalen and Columbia. During a week of adventure in March 2015, journalists representing the travel, ski and outdoor scene, arrived to Sweden to test Columbia’s new Fall 2015 collection in Scandinavian winter conditions.

The program was packed with a variety of activities; fat biking, skiing in wilderness areas, skating on natural ice, an immersion in local Sámi culture, enjoying local gastronomy, visiting Research & Development labs for outdoor equipment, snow shoe walking in deep forests and of course, taking part in Swedish after ski. 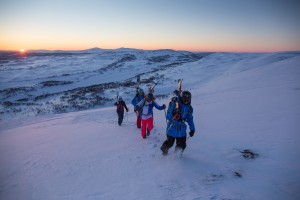 Sweden, a destination with a vast array of outdoor experiences, long history of innovation in sports and outdoors, close relationship between culture and nature and culinary revelations of local artisans really impressed itself upon the visitors. The subtle balance between the activities amounted in abundant content for the journalists and of course, lasting memories.

Parallel with the media program, a photo shoot of the new collection took place with young trendsetting skiers and models from Columbia’s #Omniten brand ambassador program. Results can be seen in various Columbia marketing assets including retail signage, online imagery, and the Columbia blog.

Jämtland Härjedalen Tourism has since 2013 been a member of the Adventure Travel Trade Association, a membership that has resulted in countless invaluable connections and cooperative partnerships with partners from across the globe.