The day started well before dawn, as our local team consisting of 5 FOUR PAWS team members (incl videographer and photographer) and a vet nurse from Animal Rescue Cambodia. The day before the team was busy preparing last-minute supplies in the capital city of Phnom Penh. Unfortunately all 20 of the dog transport crates that we had ordered got stuck in customs, so we had a bit of a frantic run around the night before trying to procure crates. But alas the team succeeded. Three minivans were loaded full of the equipment needed for the day – the freshly procured crates, leads, dog treats and set off down the muddy roads towards Kampong Thom (2-3 hour drive). 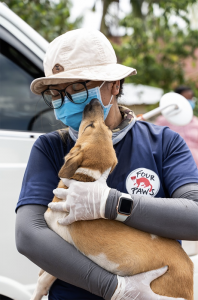 As the team arrived on site, they were greeted by the sweetest faces. Our staff member Rathany rushed to the cages, packed tightly with dogs. Slowly she counted 15 dogs, most looking sad and hopeless. She assessed their condition. Some had severe bite wounds oozing with pus, largely from the dogs attacking each other in the cage out of fear. Several of them were severely dehydrated, others were vomiting. While most dogs are usually quite scared and traumatized, hesitant to enter the transport crates, Daisy one of the youngest dogs literally leapt into the arms of Rathany when the door was opened. She showered Rathany in a bath of wet kisses, and snuggled around her neck as if to say, please never let me go. Daisy reminds us of why we fight so hard every day to end the cruel dog meat trade, these dogs are forgiving and loyal companions, not someone’s dinner.

After all the crates were safely loaded into the minivans, the team had the monumental task of removing the holding crates and slaughtering equipment that have taken the lives of thousands of dogs before. The team had to pry the heavy cages out of the mud and dirt, and load them into the vans. In Phnom Penh, the cages will be torn apart and sold for scrap metal, the proceeds of which will be hopefully used to fund the rescue of more dogs.

As for the slaughterhouse owners who were desperate to leave the trade, they were very happy that FOUR PAWS has stepped in to provide them with a new livelihood. Construction has already started and a small grocery store is being built, where they will be able to sell a variety of dried grocery goods instead of killing dogs. In a country plagued by decades of civil war, genocide, corruption, and few opportunities for economic advancement, the owners couldn’t be more pleased at the opportunity FOUR PAWS has provided them. Our team will continue working with them in the months to come, to ensure their business is a success. We also have a great recorded interview where the owner describes her excitement at a fresh start.

The event was recorded and filmed by international media (AP) and has been shared quite extensively on FP social media channels.

Despite today’s success, our job is just beginning. The rescued dogs need extensive medical treatment and behavioral care, to help them forget the horrors they experience and learn to love again. At our partner charity Animal Rescue Cambodia, the dogs are all getting vaccinated, bathed, spay/neutered (in the future), and nursed back to health. Once recovered both physically and emotionally from the trauma they’ve endured, each dog will be prepared for adoption into a loving home. But they have a long road ahead of them. 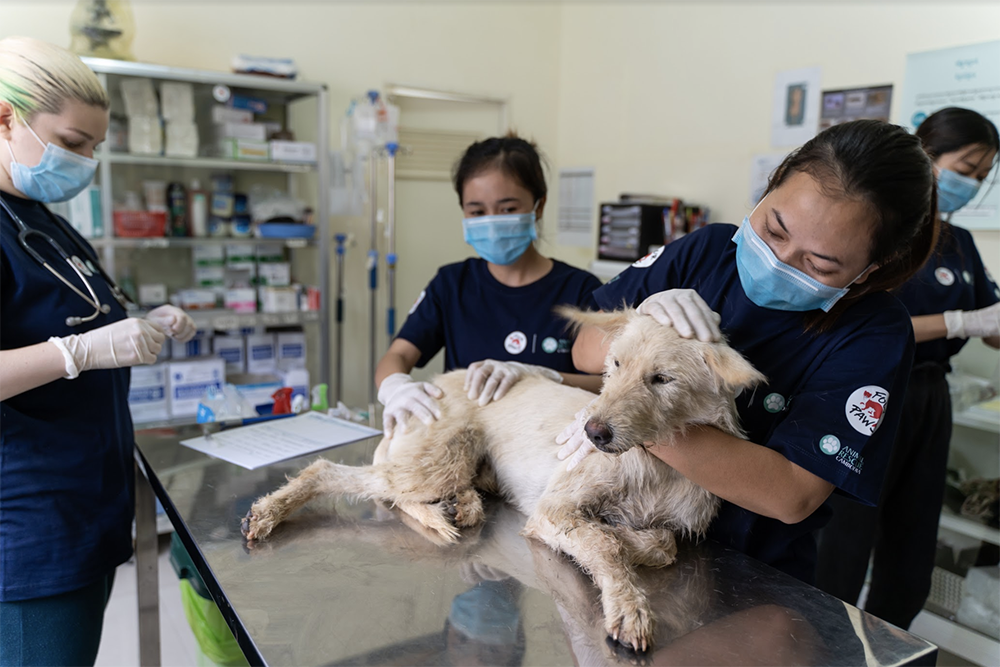