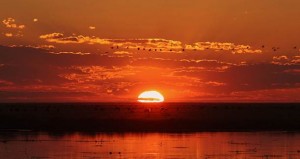 New York, NY – Steppes Discovery, a division of Steppes Travel, known for its intimate, eco-sensitive itineraries, offers an extraordinary opportunity – a journey to Zambia’s Liuwa Plain with legendary safari guide Robin Pope. In the hands of Steppes, adventurers are guaranteed a memorable, seamless tour. Rates for the five-day group tour (maximum of six people) start at $4,315 per person, excluding international flights to Lusaka.

Liuwa Plain National Park in far western Zambia on the border of Angola is one of the least-visited, least-populated, and most remote areas of the African continent. No one has explored the region more than Robin Pope, whose knowledge of Zambian wildlife is unequaled.  Robin Pope was mentored by Norman Carr, conservationist and pioneer of the walking safari, and is celebrated for his “green” approach to the wilderness and for his philanthropic work with Zambian communities. Steppes Discovery focuses on ethical wildlife tours to far-flung places for lovers of nature, beauty and thrilling adventure.

The best months to visit Liuwa Plain are November/December and May/June.  The rains begin in November, and as the clouds build up, the skies become dramatic, providing unbeatable light for photographers.  Also at this time herds of blue wildebeest (as many as 40,000) migrate from Angola to give birth to their calves, meaning predators are never far away.  In November, migratory birds heading south arrive in Liuwa, and flowers are blooming everywhere one looks.

From December to April, Liuwa is a flooded plain and inaccessible.  However, in May waters have subsided enough to make access possible, and the plains are in rude health, teeming with diverse birdlife and plump plains game. This is a prime time to visit Liuwa: skies are clear blue, a fresh vibrancy fills the air, and the immense open landscapes are so far-reaching you can begin to see the curvature of the earth. This pristine wilderness area is home to numerous wild animals including wildebeest, zebra, the endangered wild dog, wild cats, oribi, duiker, jackal, serval, hyena, cheetah and lions.

EXTENSION OPTION:
Before or after your Liuwa Plain safari, you may wish to go on safari in the Lower Zambezi National Park, located between the rugged Zambezi escarpment and the wide and spectacular Zambezi River.  The river is a magnet for wildlife, and game viewing can be conducted from boats and canoes, exploring the many islands, sand banks and lagoons in search of hippos, crocodiles, elephants and lions lying on the banks.  Game viewing is not only from the river but also by vehicle or foot through the many plains and wooded areas of the park.  The wildlife viewing can be spectacular with approximately 50 mammal and 400 bird species. Steppes also offers Photographic Safaris with wildlife photographer Sue Flood.