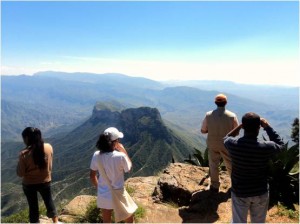 The regional development project of Grupo Ecológico Sierra Gorda in the Biosphere Reserve in Querétaro, Mexico, the Chambok Community Based Ecotourism Project in Cambodia at the Kirirom National Park,  and the Boomkolbeh – Turkmen Ecolodge at the rim of the Golestan National Park in Iran are the winners of the TO DO! 2013.

The trophies of the International Contest for Socially Responsible Tourism will be awarded at this year’s ITB on 5th March, 2014, at 2.30 pm on the main stage in hall 4.1.

The tourism projects awarded with the TO DO! 2013 share the same objective: to improve people’s living conditions by carefully developing tourism products and services in a planned manner – in ecologically valuable areas. The most important criterion for the award is the participation of the local population in the planning and implementation of all the tourism related projects. This establishes a special connection between participation, social responsibility and sustainability.

All the three projects are situated on the rim of or directly within nature conservation areas. Due to the lack of income opportunities, illegal activities such as logging and poaching happened in the past. Through the various initiatives aimed at a touristic valorisation of scenically attractive regions, a new way of natural resource use has emerged, along with alternative income opportunities – especially for women. Furthermore, the population living in the respective regions benefits from more eco-friendly ways of dealing with nature and from the reforestation These concepts are supported with training and education programmes, partly also for tourists or for the staff of companies.

The Grupo Ecológico Sierra Gorda (GESG) was founded in order to improve the living conditions of people in the Sierra Gorda. GESG is a civil society cooperation project with a total of 75 initiatives and micro enterprises involved. The mountain region covering an area of about 3,900 km2 is situated in the state of Querétaro in the North of Mexico. It was declared a UNESCO biosphere reserve in 1997. The participation of the local population in the tourism development projects is an integral component of the overall concept. With the UNESCO programme “Man and the Biosphere”, people’s use of nature is to be aligned with the conservation of ecosystems – which was achieved in the Sierra Gorda. To create alternative in-come opportunities, GESG supported the development of suitable tourism products and services in the region, from accommodation and restaurants to handicraft and small museums or historical places of interest. In this way, the financial dependence on remittances from migrant family members was also reduced.

Today, GESG only has an advisory role – the business operations are in the hands of the local population. GESG supports the project mainly through marketing, training programmes, or by providing micro-credits.

The Chambok Community Based Ecotourism Project is situated about 120 km west of Phnom Penh in a scenically attractive forest area with a diverse flora and fauna. It has existed since 2003 and was developed in cooperation with the regional NGO Mlup Baitong.

The activities around the Boomkolbeh – Turkmen Ecolodge on the rim of the Golestan National Park in the North of Iran have also convinced the TO DO! jury, be-cause from the beginning participation had been an essential part of the concept.

All three TO DO! winners provide successful examples of sustainable achieve-ments of socially responsible concepts, especially through the intensive involve-ment of the local population in the development of tourism. Therefore, they are examples of best practice for other tourism destinations. The three winners are given one TO DO! trophy each. The Swiss Foundation for Solidarity in Tourism supports the projects with an additional 5,000 Swiss Francs each, meaning to sup-port the further development of the projects.

The TO DO! Contest Socially Responsible Tourism is supported by the Engagement Global/ German Federal Ministry for Economic Cooperation and Development (BMZ), the Protestant Agency for Diaconia and Development/Tourism Watch, forum anders reisen, ITB Berlin, the Swiss Foundation for Solidarity in Tourism (SST), and Studiosus Reisen München GmbH.