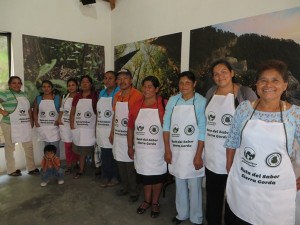 Communities in the Sierra Gorda are officially ready for tourism, with this month marking the completion of a 3 year Inter-American Development Bank-supported initiative in the region. The project “Promoting a Rural Tourism Model in Protected Natural Areas” supported local rural tourism operators in renovating and equipping their destinations and facilities, as well as providing training in customer service and basic administration skills.

Over the past three years, 83 projects received funding and technical support, including tourist accommodation facilities, restaurants, as well as artisan workshops that produce regional goods from jams, dried fruits, and natural remedies to ceramics and embroidered clothing. Implemented by Grupo Ecológico Sierra Gorda (GESG), the project aimed to contribute to the development of an economy based on conserving the natural environment within rural communities of Mexico and promote the stunning Sierra Gorda, Querétaro as a sustainable tourism destination. So far, some 398 families living in or next to the Sierra Gorda Biosphere Reserve municipalities – some of the poorest in the country – have benefitted from the project, with the region also receiving thousands of new visitors.

The official closing ceremony was attended by BID representative, Guillermo Aguilar Ríos, and the director of The Sierra Gorda Biosphere Reserve, Alejandro Torres García, who discussed the results obtained, benefits created by the project and hopes they hold for the future of rural sustainable tourism in the region.

Of the project’s achievements, Guillermo Aguilar Ríos stated that “great and fruitful work has been done. With the newly designed commercial strategy, touristic microenterprises will see the benefits as more and more visitors arrive wishing to see this Mexican jewel”.

During the project Martha Isabel Ruiz Corzo, director of GESG, observed that while there had been areas of great success, sales and promotion of the region and local services needed greater attention. This is why the project formed a board of Sierra Gorda Community Promoters whose function will be to promote and sell the Sierra Gorda as a tourist destination. The system of Social Return on Investments, which is in operation in the area, will be the key to the project’s success, creating visibility around how the Sierra Gorda Tourism Destination was brought together and strengthened by the Sierra Gorda Conservation Alliance. “The Alliance hopes this project will be adopted as a replication strategy in other Natural Protected Areas that work with rural communities living in extreme poverty throughout Mexico”, Mrs Ruiz Corzo stated.