Benign sharks. “Commando kayakers.” Finless surfing to seaside chamber music. You don’t see them everyday. But all will be shown onscreen February 19-22, 2009 to filmgoers at the 6th San Francisco Ocean Film Festival at Fort Mason Center. 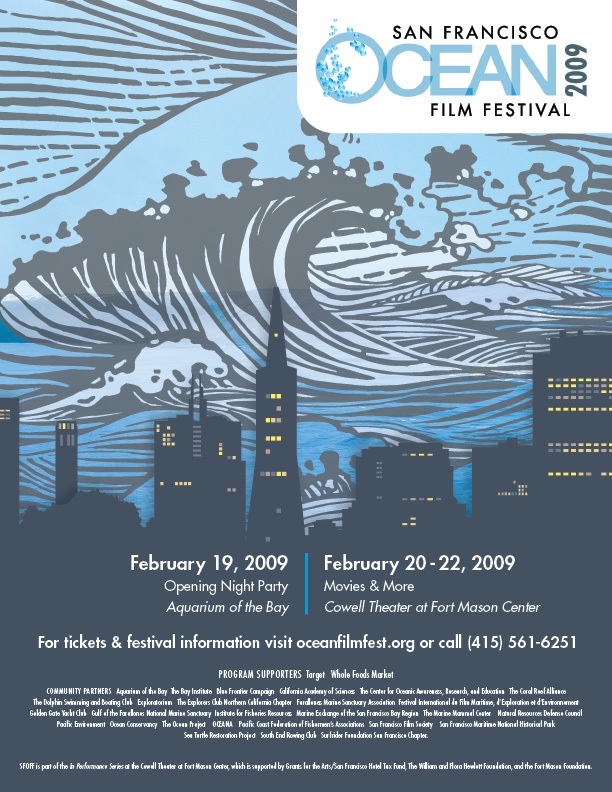 Over the past five years, the festival has earned a reputation as the largest and most eclectic festival of its kind, featuring dozens of new documentary, animated and scripted films from around the world. Subject-wise, the films run the gamut from scientific exploration of ocean life, to activists’ efforts in cleaning up polluted waters, sports, and creative visions of still unspoiled seas.
This year, over 4,000 people are expected to attend the festival, not only for the films, but also for the camaraderie of the get-togethers, expert talks, and informal Q&A sessions. The public is invited to join a festival kick off party from 7-10 p.m. on Thursday, Feb. 19 at the Aquarium of the Bay on San Francisco’s waterfront. Live music, dancing and food from the Bay Area’s top restaurants will kick off the festivities. During the festival, organizers will also present awards in several categories, as well as a free student education program.
A particular standout of this year’s festival will be a special screening and panel event on sharks held at 1pm on Saturday afternoon featuring conservation filmmaker David McGuire. McGuire will show his new documentary, “The City of the Shark,” that reveals the lives of sharks in the San Francisco Bay. The film details the efforts of the Aquarium of the Bay to study, care for and protect them. Other shark related films will include “Great White Shark–A Living Legend,” directed by Joe Kennedy about the sharks of South Africa; “Sharks in Deep Trouble” by Leslie Rochat; and “The Man in the Grey Suit” by returning filmmaker Roger Teich. A short promo, “Rethink the Shark” cleverly dramatizes the notion that people’s fear of sharks is out of proportion to the danger they present in real life. The film program will be followed by a panel with leading shark experts, filmmakers and members of the media who will discuss our understanding, and misunderstanding of sharks.
The films will be shown in eight separate programs, expanding this year to include Friday night.
The Friday night schedule will start at 7 p.m. and feature three films. “Dubside” by Justine Curgenven follows a nameless man-in-black engaging in “commando kayaking.” In the practice, kayakers use their inflatable, packable kayaks and public transportation instead of their cars to get them where they need to go. That film will be followed by Champ Williams’ “Attack of the Sea Slugs,” a close up look at the striped slugs that arise from beneath the floor of Puget Sound to gobble up pretty orange polyps that are poisonous to nearly any other sea creature. The evening will close with Ron Colby’s feature, “Pirate for the Sea,” describing the adventures of eco-activist Paul Watson, leader of the Sea Shepherd Foundation, widely considered to be the most aggressive organization fighting to save the ocean environment.
The enthusiastic spirit of past festivals has helped build a community of equally dedicated filmmakers and filmgoers who share their videos, information and opinions online. Last year, the SFOFF, in an effort to harness and champion that spirit, put out a call for personal videos that documented local responses to the Cosco Busan oil spill of November, 2007. The results were distributed on YouTube providing a boost to the growing online community of sea lovers. 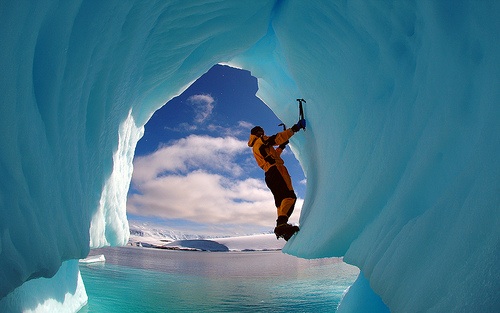 This year more environmental threats and clean up efforts will be highlighted–from Chile to India and Greenland. On Sunday morning, “All Points South,” a trailer by Will Henry and Sachi Cunningham, will show surfers joining village fishermen to fight a proposed pulp mill that would destroy the natural shoreline. Saturday afternoon, “Between the Tides,” by Tyler Quintano and Nick Manning documents a diaspora in progress resulting from climate change and rising tides in Bangladesh and the islands of the Ganges Delta.      Two Inuit girls in Northern Greenland star in “Silent Snow,” a short film by Jan van den Berg to be shown Saturday evening. The pair view the catastrophe of pollution as they travel through melting ice to a village that is disappearing due to pesticides brought by unseen currents from around the world. And in Baja California, land development to support tourists and retirees is seen as destroying the environment they came to enjoy in “Tomorrow’s Baja” by Yves Garceau, also scheduled for Saturday evening. The film reveals a shocking statistic pointing out the economic disparity between locals and tourists: a typical barrio family spends 20% of its income on water, but uses less than a single golf course sprinkler. On the local level, “Call it Home: Searching for Truth on Bolinas Lagoon” will show how activists even in a protected area react to changes in their environment. The film by Bill Chayes and Chuck Olin will also be shown Sunday afternoon.
For the first time, there will be a special program celebrating our sanctuaries and marine protected areas. See films on the Farallones and Cordell Bank Sanctuaries, the new Farallon Islands video, and California’s Marine Protected Areas on Friday, February 20th from 2:00 pm to 4pm, at the Aquarium of the Bay, on the Embarcadero at Beach St. 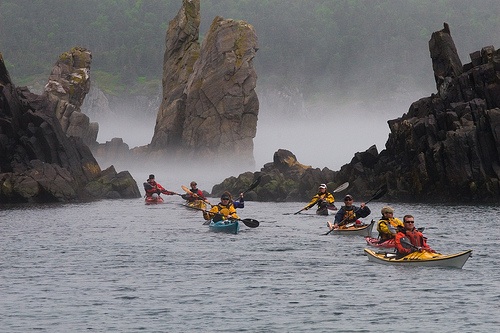 On the lighter side, festival films will include Todd Stewart’s “The Surf Magazines Don’t Talk About Lapsed Catholics,” Cecile Marie’s “Better Than Sex?” examining the true commitment of San Francisco Bay swimmers, and “Musica Surfica,” a creative endeavor of the Australian Chamber Orchestra and a group of surfers. Mick Sowry filmed the two groups who gathered on the isolated King Island in the Southern Ocean to blend their arts. The surfers used finless boards to be able to expand their movements and merge them with the music. The film will be shown Saturday evening.
Advance tickets, at $10 for individual programs, are on sale now through the Cowell Theater Box Office at (415) 441-3400 or online www.oceanfilmfest.org. Tickets and passes are also available for the opening night party and the eight film programs. A $110 pass will cover opening night and all programs. More information may be obtained by calling the festival office at (415) 561-6251 or by emailing [email protected]

About The San Francisco Ocean Film Festival
The San Francisco Ocean Film Festival (SFOFF) is a volunteer-driven non-profit organization dedicated to using film to improve public understanding of the environmental, social and cultural importance of marine ecosystems and foster a spirit of ocean stewardship. SFOFF is now the premier festival in North America for filmmakers from around the world to screen their works featuring the magnificence of our oceans, threats to marine life, and the human connection with the marine environment. For the past six years, SFOFF has produced an acclaimed festival of ocean-themed films from all over the world that are largely unavailable to the general public. Themes range from marine science and industry to sports and adventure. The films are intended not only to entertain the audience but, more importantly, to educate and encourage active participation in ocean conservation. Each program is followed by in-depth discussions with filmmakers and content experts, creating a unique public forum on the importance of marine resources. SFOFF 2009 will attract more than 4,500 people to one of the most anticipated and inclusive ocean events of the year.