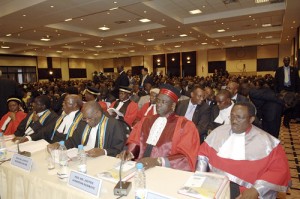 The East Africa Court of Justice (EACJ) Appellate Division will make a ruling on March 15th 2012 on whether the Tanzanian government has grounds to oppose the jurisdiction of the court to determine whether it should go ahead to construct a road through the world famous Serengeti National Park.

If the higher regional court decides against the appeal made by the Tanzanian Attorney General, then it means that the court case against Dar es Salaam’s wish to construct the road will go to full trial.

The case was filed by the Africa Network for Animal Welfare (ANAW) challenging the government’s decision on the grounds that if constructed, the road would have far-reaching consequences on the Serengeti-Mara ecosystem which is shared between Kenya and Tanzania. ANAW had wanted the Tanzanian government compelled to stop the construction of the road through a permanent injunction

The announcement on the ruling date was made on January 24, 2012 by the President of the EACJ’s Appellate Division, Justice Harold Reginald Nsekela in Arusha.

The EACJ is the instrument for settling disputes among members of the East African Community, which are Kenya, Tanzania, Uganda, Rwanda, and Burundi. Serengeti Watch is supporting this legal action and is asking for your help as well.

You can donate specifically to this fund here.

The legal case is significant. It seeks to permanently restrain the government of Tanzania from the following:

The legal action states that the highway is first and foremost an infringement of the Treaty for the Establishment of the East African Community. It would cause “irreparable and irreversible damage to the environment of the Serengeti National Park and the adjoining and inseparable Maasai Mara Game Reserve in Kenya.”

Under the terms of the EAC Treaty, partner states are required to cooperate in the management of shared natural resources, notify each other of activities that are likely to have significant transboundary environmental impacts, and to follow protocols for Environmental Impact Assessment.

Serengeti Watch is supporting the legal fight by providing funding and seeking help from other legal and environmental organizations.

You can help too. This case is important. As in any court battle, there is no guarantee of immediate or even eventual success. But it is worth the fight – this has the potential of not only stopping the highway but of warding off future threats. The next time such a plan is brought forward, there will be an important decision on the books and and legal precedent to follow.