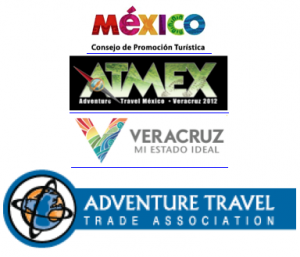 ATMEX is an international event specialized in adventure and nature tourism and 500 exhibitors and national and international buyers will participate; it is aimed to display the enormous potential that our travel destinations have to an exclusive international market.

The Mexican Minister of Tourism, Gloria Guevara Manzo, said that adventure travel is an industry that generates annually 90 billion dollars worldwide and that Mexico has great potential to develop this segment as it is one of the five countries with more biodiversity in the world.

“That is why we have decided to fully support this sector; last year the World Adventure Travel Summit took place in Mexico in San Cristóbal de las Casas, Chiapas plus and we are sure that the first edition of Adventure Travel Mexico taking place this year in Veracruz will be a success,” she said.

Guevara also explained that nature and adventure travel is one of the segments with fastest growth in the travel industry.  In 2010 alone, this sector grew 17.4 percent globally compared to tourism in general, which experienced an increase of 4 percent, according to data from the World Tourism Organization (UNWTO).

In turn, the Governor of Veracruz, Javier Duarte de Ochoa said that his state is very proud to host this international event, especially because of the enormous natural richness offered by the entity to adventure sport lovers.

Veracruz is a privileged state full of natural resources, culture and biodiversity. By choosing our state as host for the first edition of Adventure Travel Mexico means recognizing a pioneer and national leader that promotes nature and adventure tourism,” he said.

He stated that Veracruz has the natural resources, biodiversity, and culture to be a national leader in the promotion of ecological travel, as it offers the ideal setting for the practice of all the activities included in this segment. He also said that his government promotes tourism activities with a social perspective, as a key pillar for development and prosperity of the tourism offer.

A total of 22 international speakers will share their experiences in this forum, covering topics that range from special destinations, innovation and exploration, high performance, and consumer trends, to security, quality, social responsibility and environmental awareness.

Among the attendees are Shannon Stowell, President of Adventure Travel Trade Association, ATTA, that will talk about “The adventure travel industry”, mountaineer Carlos Carsolio, the first Mexican to climb to the top of Mount Everest, with his lecture on “Adventure and innovation”; Martha Isabel “Pati” Ruiz Corzo, Director of the Biosphere Reserve Sierra Gorda of Querétaro, with the theme “The community development “, as well as J. Wallace Nichols, Founder and Co-Director of Oceanrevolution.org, with the theme “Conservation in adventure travel”.

The event will take place at Veracruz’s World Trade Center in Boca del Río that offers 98 thousand square feet of exhibition space and will be the perfect setting to create sales opportunities and will increase adventure travel in the state and in the country.

ATMEX 2012 organizers estimated an economic impact of more than 147 million pesos during its development and, above all, an important perspective of promoting tourist destinations of our country in the adventure segment.

Among some of the attendees to this special presentation of the First Adventure Tourism Tradeshow of Mexico, Veracruz 2012, “Adventure Travel Mexico, Veracruz 2012” were Leticia Perlasca Núñez, Secretary of Tourism, Culture and Cinematography of Veracruz, Rodolfo Lopez Negrete, General Director of Mexico’s Tourism Board, and Luis Alfonso Lugo Platt, Undersecretary of Tourism Operations of SECTUR.