Heliconia, producers of Facing Waves, is proud to announce the launch of Season 6 on FOX Sports Sun, Monday, June 4, at 10:30 p.m. EST. 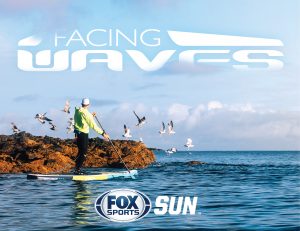 This season, Facing Waves will feature a variety of hosts—including Luke Hopkins, Anne Pagano, David Verde, and Ken Whiting—as they travel the globe in search of more of the world’s top paddling destinations. Visiting Wales, West Sweden, the Dominican Republic, Jamaica and Florida’s Great Calusa Blueway, the team will paddle kayaks, stand up paddleboards and more as they explore what makes each destination unique.

The first episode of the season, Paddling Wales, follows David Verde as he explores some of the most beautiful and dramatic countryside in the United Kingdom. Along with some local characters passionate about paddling and the outdoors, David surfs a man-made wave at Surf Snowdonia, stand up paddles whitewater rivers, and tries ‘coasteering’ along dramatic seascapes. The episode will premiere on FOX Sports Sun Monday, June 4, at 10:30 p.m. EST.

Learn more about the series at www.facingwaves.com. To showcase your top paddling destination or brand, contact Brendan at 613.582.7154 or [email protected].