Jackson Hole Wildlife Safaris has partnered with Encounters Asia to bring six individuals on a scouting trip to the Indian Himalaya this spring to search for the elusive snow leopard in the Ulley Valley in the north of India. The Ulley Valley is home to the Snow Leopard Lodge, the first lodge in the valley to cater exclusively to tourism into the valley. The lodge was the result of a successful homestays program, an initiative put forth to encourage standards in tourism and a sustainable economy for locals. 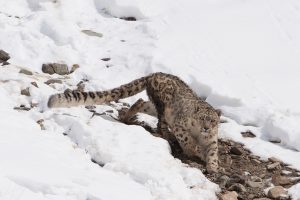 In 2001, in the north Indian city of Leh, a visitor survey was sent out to determine if there was an interest in the concept of a sustainable tourism program aimed at educating locals and using local resources to develop a sustainable business that would, in turn, foster conservation and preserve cultural values. A positive initial response paved the way for the Homestays Program, implemented by the Snow Leopard Conservancy and made possible by funding assistance from UNESCO and The Mountain Institute with partnerships including the Snow Leopard Conservancy – India Trust, Ladakh Ecological Development Group, MUSE, and Kanchenjunga Conservation Community.

The Homestay Program had three objectives. The first was to ensure that the homestay experience was an authentic mountain experience for visitors and that the locals receive a fair return for their services and investments. The second objective was to be sure that the homestays program was actively preserving the local culture and natural heritage. The third objective was to ensure consistency for the international traveler, to ensure that each homestay would meet a certain minimum standard in the areas of quality and experience.

Ten percent of the tourism revenue generated by the homestays program goes back into the community in the form of infrastructure. Some of the installments in the Ladakh region include predator-proof livestock fencing, parabolic solar water cookers, solar showers and tent facilities with communal cooking, waste management, and recycling. For every farmer that installs predator-proof livestock fencing, it is estimated that 2-5 snow leopards are saved from retaliatory kills. While biologists work to identify the top threats to these amazing cats, one of the biggest things that can be done is to protect them from illegal hunting and trapping and to shift the local perception so that they will not be killed because of livestock predation. The homestays program has been an influence in driving this change.

Jackson Hole Wildlife Safaris has two immediate openings on this special scouting expedition to the Snow Leopard Lodge this March. The trip departs from Delhi, India on March 22nd and concludes in Delhi, India on April 2nd.