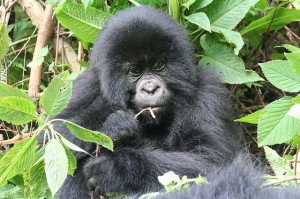 Photo is credited to Scott Chacon and is listed under Creative Commons.

The following excerpt is from an article published in Slate.com, by Antonia Windsor, on the reemergence of tourism in Rwanda. The country, once known for its bloody ethnic genocide, has spent the last seven years investing in “low impact, high value” environmental tourism and has attracted a great deal of foreign investment, according to Windsor.

That Rwanda attracts the kind of tourist who prefers to charter a helicopter than make the long journey by road is testimony to the remarkable transformation the country has undergone since the 1994 genocide… There are just 64 permits issued each day by the Rwanda Development Board, and groups are never larger than eight people. When I arrive for my briefing in the town of Musanze, I am assigned a family of 29 gorillas called Susa, and I’m joined by three young couples… We are able to creep incredibly close to these magnificent beasts without them so much as flinching; indeed, a large male silverback strolls right past while my attention is diverted elsewhere, giving my leg a punch in the process. Along with two silverbacks are some females, including one who is seven months pregnant, and a couple of boisterous youths. I spend an hour watching them and attempting to take a decent photograph, before descending to Virunga Lodge for a restorative massage and a lazy afternoon in a hammock.