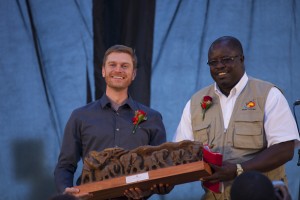 Seattle, WA – The global leader in guided active adventure travel, REI Adventures presented the Namibian Conservation Guards with its 2013 Sustainable Tourism Award. Through the award, 500 guards will receive a backpack full of gear, apparel and supplies to support their efforts in protecting the country’s natural resources and wildlife.

In 1998, four conservancies were registered by the Government of the Republic of Namibia, and today there are 79 conservancies covering 19 percent of the country’s land area. More than 250,000 rural Namibians live within these boundaries, and about 130,000 tourists visit their communities each year. Conservation Guards play an important role in patrolling the region, protecting habitat and ensuring illegal wildlife poaching and misuse of natural resources are kept to a minimum. The award from REI will enhance the guards’ effectiveness on the job while they traverse some of the most isolated, rugged terrain in Sub-Saharan Africa.

The Conversation Guards were selected for REI Adventures’ Sustainable Tourism Award because of their success in nature conservation and positive impact to the community through the protection of wildlife that is vital to the tourism industry and environment.

In early November, REI Adventures will ship a container packed with sleeping bags, back packs, sun-protective and performance clothing, pocket knives, and other gear and supplies to Windhoek, Namibia. In early January, backpacks filled with the items will reach 500 guards for use across Namibia.

“The program is a success model in facilitating private sector tourism partnerships with local communities,” said Cynthia Dunbar, REI Adventures manager. “We applaud President Pohamba and Minister Herunga for their vision and leadership in supporting the effort across their beautiful country.” 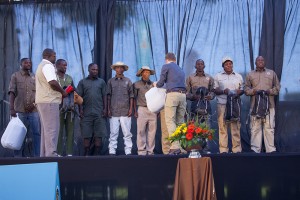 For more than 20 years, WWF has worked in Namibia to help conserve vital habitats for the species and people who depend on them. Their work includes collaboration with the government and communities to develop sustainable management of the country’s natural resources from communal conservancies.

“For two decades, Namibia’s community game guards have protected the iconic wildlife this unique country offers to travelers,” said Chris Weaver, WWF-Namibia Managing Director. “They’ve made Namibia an inspiring destination and success story in Africa’s struggle against poaching—and they’ve been doing it with minimal equipment much of that time. World Wildlife Fund is grateful to REI Adventures for this incredible gift and for helping the game guards be even more effective as Namibia’s frontline protectors.”

“The magnitude of this donation is at such a scale that it will impact the efficiency and performance of Namibia’s five hundred conservancy game guards for many years to come,” said Permanent Secretary for the Ministry Environment and Tourism Simeon Negumbo.

Established in 1990, the ATTA serves over 900 members in over 90 countries worldwide. Members predominantly include tour operators, tourism boards, specialty agents and accommodations with a vested interest in the sustainable development of adventure tourism. The ATTA delivers solutions and connections that propel members towards their business goals and the industry toward a responsible and profitable future.

“In connecting WWF and REI together Namibia’s wildlife and people will benefit,” said Mr. Shannon Stowell, President of the ATTA. “It is our hope that the 650 adventure travel industry professionals who have witnessed the gifting of the award at the Adventure Travel World Summit will leave inspired to consider impactful and sustainable ways to effect change in their own communities.”

The history of communities in conservation

Namibia was the first African country to weave the protection of the environment into its constitution. Since the passage of communal conservancy legislation in 1996, there has been a remarkable recovery of the country’s wildlife. In the years that followed, a significant shift occurred. Previously, wildlife was perceived as a detriment to peoples’ livelihoods and poached as meat. Today, wildlife is considered a valuable asset to the local communities, their environment, their cultures and promotion of a strong tourism industry.

Once at historic lows, Namibia now has the largest free-roaming population of black rhino, an expanding population of lions, and the biggest cheetah population in the world. Elephants are recovering and enlarging their range, while migration routes for many animals are being re-established.

REI Adventures has brought outdoor enthusiasts to Africa for 28 years, and the country continues to be an extremely popular destination for its customers. With 10 unique itineraries led by local guides to “bucket-list” locations in Botswana, South Africa, Tanzania and Namibia, each trip is designed to highlight incredible wildlife, unique cultures and activity options.