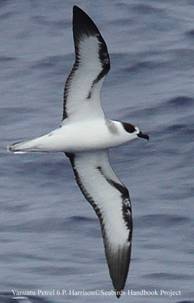 Known previously from just seven museum skins, this rare and little-known seabird has not been seen at sea for 83 years. The sightings of 21 individuals and photographs by Harrison and the Zegrahm team are the first documented live sightings of the Vanuatu Petrel, at sea, since originally collected by Rollo Beck in 1927.

The observations of this long-lost seabird species occurred during a Zegrahm Expeditions voyage from Auckland, New Zealand to Port Moresby, Papua New Guinea, during which the expedition called at several remote and seldom visited island groups, including New Caledonia, the Vanuatu archipelago and the Solomon Islands. Seen over a three-day period, sightings of this ‘back-from-the-dead’ species culminated with 11 individuals, which were observed on 8th of February, just 60 miles from where the original six specimens were collected in 1927.

Harrison is currently involved in a 10-year project to write and illustrate a Handbook to the Seabirds of the World, to be published by Lynx Edicions, Barcelona, Spain. Harrison’s original work, Seabirds of the World: An Identification Guide, published in 1983, has been the standard reference on the world’s seabird species for over a quarter of a century. Plans are set to return to the area in November on Zegrahm’s Faces of Melanesia expedition and additional plans are currently underway for an expedition in 2012. Unlike the 2010 expedition, however, the 2012 expedition will continue through the rarely visited Solomon Islands to the Bismarck Archipelago, the Caroline Islands and to Torishima, home of the Short-tailed Albatross, before ending the voyage in Yokohama, Japan. The 2012 expedition will once again be led by Zegrahm cofounder Peter Harrison