Quark Expeditions, the leader in polar adventures, has expanded its global sales team in order to accommodate the increase in demand anticipated by the recent addition of two new polar expedition vessels: the World Explorer, a 176-passenger hybrid-powered, all-balcony, all-suites vessel ready for the 2018/19 season and Quark Expeditions’ recently announced new ship, a 200-passenger vessel that will be launched for the 2020/21 Antarctic season. 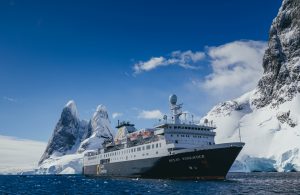 The expanded team will be led by Thomas Lennartz, Vice-President of Sales, and Meg Murgatroyd, Global Partnership Director, whose knowledge and expertise in expedition cruising will enable Quark Expeditions to build closer, more effective partnerships with their tour operators, wholesalers and retail travel partners globally.

Since its inception in 1991, Quark Expeditions has been a pioneer in polar expedition travel and has been committed to creating a new standard of excellence in polar expedition travel by providing authentic, life-changing experiences that can only be had in the most unique and remote parts of the polar regions. “Polar is all we do. Our ability to specialize in the polar regions is what has helped us become—and will help us remain—the undisputed leader in polar adventure travel. But, we are committed to providing more than a superior expedition experience—we are also committed to providing our partners with a superior sales experience, which is why we are expanding our team to include additional sales leadership globally,” said Lennartz.

In order to support strong sales growth in North America, Quark Expeditions is expanding its team to now include a Regional Sales Director. Beth Mercier, based in Denver, CO, has been appointed to this new role, with a focus on supporting and growing retail travel partners, national accounts and consortium business. She has a long history in expedition cruising and working with travel agents. For the past six years, Mercier has specialized in small-ship expedition cruising, and drove business for companies such as ExpeditionTrips.com and Hurtigruten.

“I feel proud to join the team at Quark Expeditions. In this rapidly changing industry, representing such a genuine and high-quality experience is important. The loyalty expressed from the customers, employees and expedition staff at Quark Expeditions is exceptional. I couldn’t be happier to encourage others to sail with such an amazing company,” said Mercier.

David Tanguay, based in Toronto, has been appointed as Regional Sales Director for Europe, the Middle East, Africa and South America. He has been a Key Account Manager with Quark Expeditions since 2012 and integral in driving partner growth with charters, groups and FIT business with key global partners.

“I am thrilled to be a part of the Quark Expeditions team as it continues to expand. Specifically, in Europe and South America, where we are seeing unprecedented growth. I am looking forward to working with our partners to ensure they are supported in every way.”

Additionally, Christiane Bach, based in London, has been appointed as the Business Development Manager for the UK and Germany. She has joined Quark Expeditions with 15 years of experience in experiential and expedition travel, having worked with G Adventures in Europe.

“As the first Quark Expeditions team member to be based in Europe, I am grateful for the opportunity to contribute to the company’s further development in this region. I am excited to support all of our partners in the UK and Germany with everything they need to offer amazing polar experiences to their clients.”

Quark Expeditions also has plans to support the growth coming out of their South Pacific and Asian markets. Recruitment is already underway for a new Regional Sales Director, Asia Pacific, and an announcement sharing more details is expected to be released shortly. These sales expansion plans are being announced only one year after the launch of their new Beijing branch office which is credited as having helped solidify Quark Expeditions’ continued growth and leadership in China’s rapidly increasing outbound tourism market.

Quark Expeditions has been the leader in polar adventure travel for over 27 years. It is a member of Travelopia, a group of leading specialty travel brands recently acquired by KKR, a leading global investment firm, and boasts a long history of polar firsts, from the first-ever tourist transit of the Arctic’s Northeast passage to the first commercial passenger circumnavigation of Antarctica.