Water for Hwange, one of the organizations that received funding from the Adventure Travel Conservation Fund (ATCF) in 2018, works to sustain water resources vital to wildlife and communities in and around Zimbabwe’s Hwange National Park. With a challenging drought in the country this year, Hwange National Park faces an even greater need for dependable water. Limited rainfall this season positions parts of the country with low water reservoirs, which impacts not only hydropower availability from Lake Kariba (a major energy source for Zimbabwe and neighboring Zambia) but also water availability for rural communities. According to Richard Kunyadini, an official from the city of Harare, “The capacity of our lakes is very low with two of our dams, Seke and Harava, going dry at seven percent (capacity). We can no longer extract water from them.” 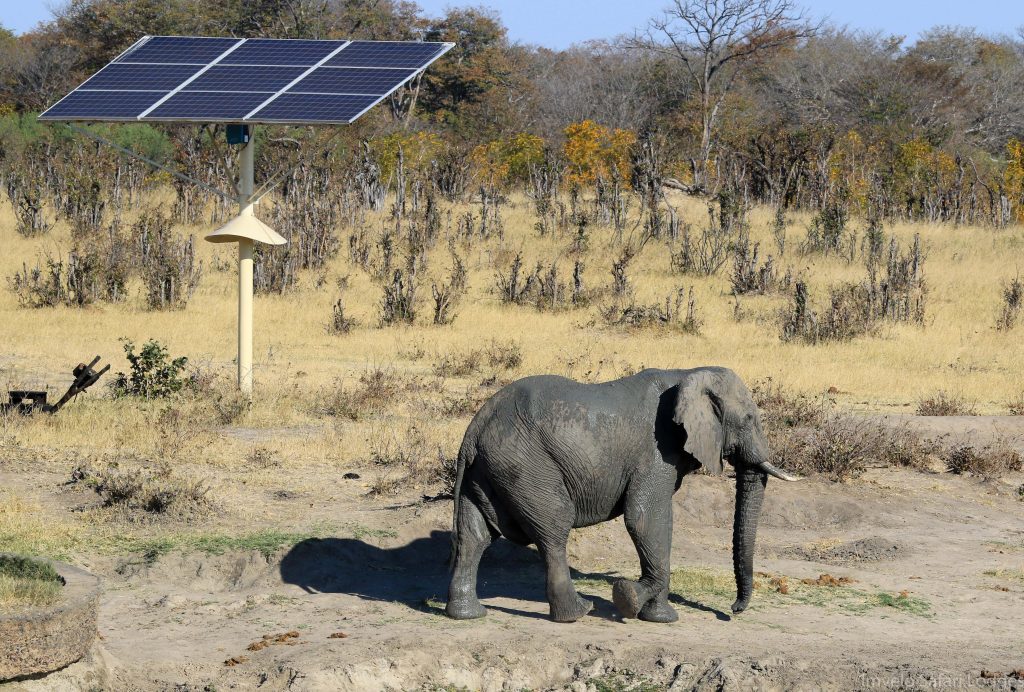 Water for Hwange, one of the organizations that received funding from the Adventure Travel Conservation Fund in 2018, will help provide a water source for its abundant wildlife.  © Water 4 Wildlife Trust and Imvelo Safari Lodges

Ensuring an adequate water supply represents a significant need for Hwange National Park. The park boasts the largest natural reserve in the country with an area of 5,657 square miles. It serves as an important tourist destination hosting more than 100 mammal species, 400 bird species, at least 1,000 floral species, 230 different trees and shrubs, and almost 200 grasses. Animals such as lions, leopards, cheetahs, hyenas, wild dogs, and rhinos are prevalent, but the park is best known for its elephants and has one of the world’s largest populations with around 40,000 tuskers.

Hwange National Park is located just an hour south of Victoria Falls and experiences this drought more significantly due to the fact no major rivers exist within the park boundaries. The park originally addressed water scarcity issues by installing windmill-driven pumps in the 1920s. These provided a reliable source of water during the dry season and, in turn, kept elephants and other wildlife from straying into local villages. The windmill pumps were later replaced with diesel-power water pumps that are currently over-aged and in a state of disrepair. The Water for Hwange project aims to install solar water pumps to provide a more sustainable, clean, and reliable water source for the wildlife in Zimbabwe’s Hwange National Park and for the people in the bordering communities.

With $20,000 USD awarded to this project from ATCF members in 2018, work began in early 2019 with planning and quotes for constructing pumps at four different locations in and around the park. This includes the Mfagazaan location inside the park, the Mbazu site within the park, the Makeni village, and the Emanaleni village. By the end of this month, these quotes will be finalized and deposits put down to proceed with purchasing supplies and carrying out final inspections. If all goes as planned, all of the wells, solar arrays, and pumps will be completed and operational by 15 June 2019. 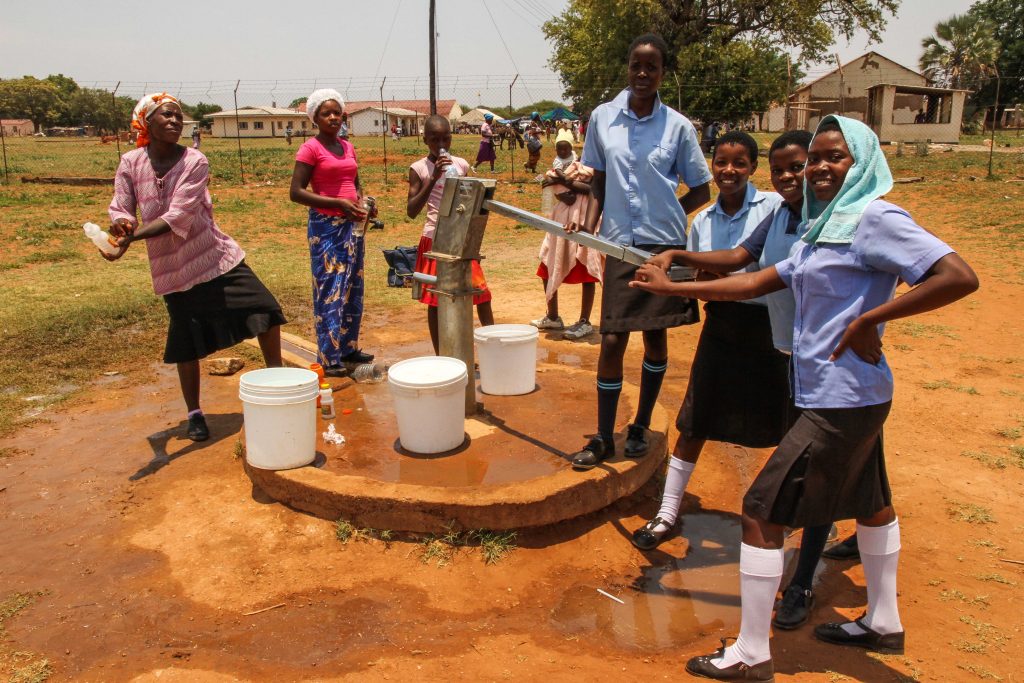 The Water for Hwange project will also provide a clean and reliable water source for people in the bordering communities. © Water 4 Wildlife Trust and Imvelo Safari Lodges

Hwange National Park is considered one of Africa’s great parks and is home to the “big five” animals (lions, leopards, rhinoceros, elephants, and cape buffalo). In addition to the abundance of flora, it is considered one of the most diverse parks in the world and an important park to protect and conserve.

As such, this project not only holds the promise of delivering adequate water supplies to the people and wildlife of the area, but a myriad of other natural and cultural conservation benefits ensure this project will be worthwhile. It will result in a reduction of carbon emissions with cleaner energy sources, a reduction in fuel costs, less time spent on fetching water and more time spent on uplifting the community, fewer maintenance fees on boreholes, a healthy population, and less migration of wildlife outside of the park into community areas thus reducing human/wildlife conflict.

Water for Hwange is just one of the nine projects supported by a grant currently funded by ATCF. Since its inception in 2017, the organization has awarded more than $215,000 USD toward nine projects in eight countries in its first two grant cycles. 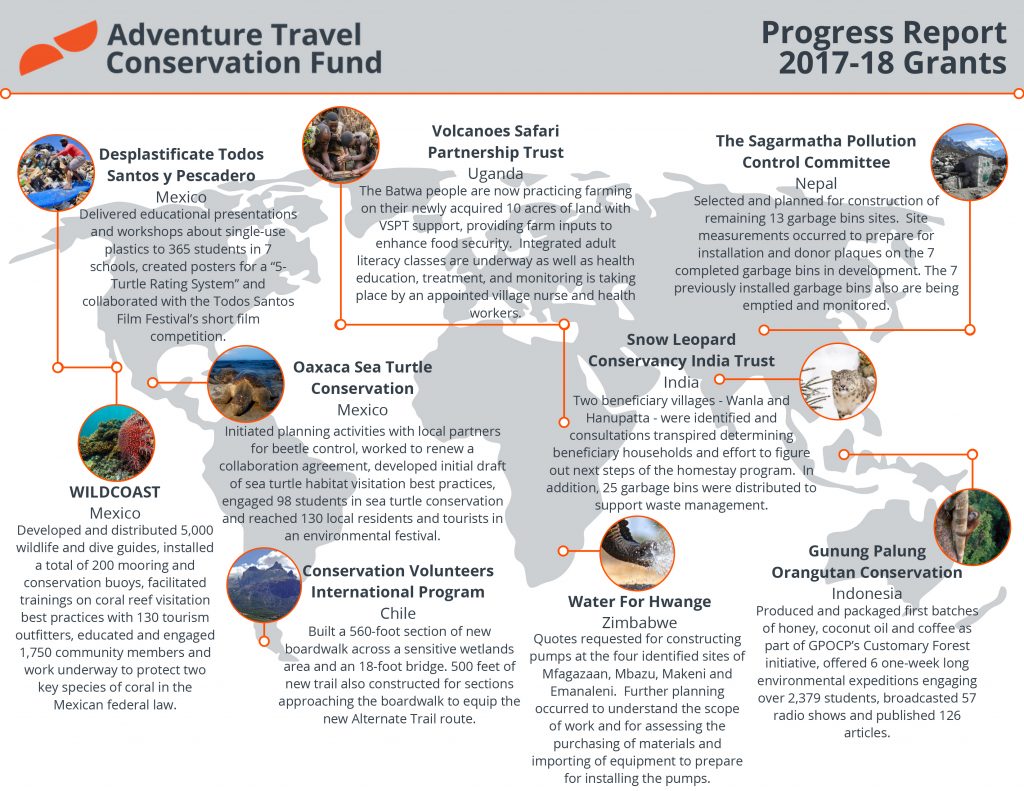 The organization is thrilled to be starting the third cycle of grants with project nominations due by 17 May 2019. Only ATCF members are able to nominate up to two projects during each grant cycle. ATCF proudly works across the adventure travel and outdoor retailer industries coalescing the value chain of member organizations from tour operators, accommodations, direct marketing organizations, travel agencies, and nonprofits in nominating and voting on conservation projects worldwide.

Read about all the other exciting projects and their progress during the first part of 2019. To join this work and support projects like Water for Hwange, ATCF would be more than happy to enlist new member companies to join a select group of more than 70 member organizations leading and directing conservation efforts throughout the world. Now would be the time to do so in order to catch the project nomination window that closes on Friday 17 May.

Check out ATCF’s projects and membership details and feel free to email any questions to [email protected].