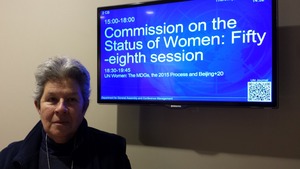 Last week long-time conservationist and gender activist Martha “Pati” Isabel Ruiz Corzo participated in the fifty-eighth session of the UN Commission on the Status of Women (CSW), at United Nations Headquarters, New York. Ms Ruiz Corzo was invited as a panelist to discuss the issue of gender and access to resources, an issue of growing concern and import as cities around the world grapple with achieving both sustainability and a higher degree of resilience, while rural progress and development continues to rapidly advance.

Central to these discussions is the question of how best to promote women’s access to productive resources such as land, technology, and institutional credit and finance in an effort to reduce gender inequality and poverty. Too often, women are locked out in terms of ownership, decision-making, and use of such resources, meaning they reap little benefits from any of the development such resources can yield. And while the challenges to women’s access are complex and often context-specific, there are also many similarities, such as inadequate legal standards and/or their ineffective implementation at national and local levels, and discriminatory attitudes and practices at the institutional and community level.

A human-rights based approach to development calls for a commitment to ensure that both women and the poorest of the poor are able to engage in and equally benefit from development programs – two groups who have often been left behind in the past. But given the opportunity – and the access – Ms Ruiz-Corzo says that women are the key to building resilience in rural and urban areas. Ms Ruiz Corzo says, “We’ve seen many instances in the Sierra Gorda, where women that have access to basic resources that were previously inaccessible such as credit and training, have been able to create sustainable livelihoods for themselves. In order to ensure that all women can enjoy their rights in practice, we must look at removing those barriers currently impeding women’s ability to benefit from our global resources.”

Panelists provided overviews on the current status and expectations while representatives of Member States and non-governmental organizations were encouraged to share their expectations, proposals and perspectives on how to promote women’s access to productive resources.