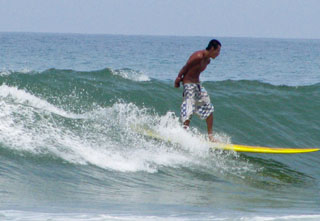 San Francisco, CA – Llama Expeditions, based in San Francisco now takes surfing tourists to the perfect breaks of Peru in a program that also helps the inner-city kids of Lima achieve a better life.

The company that has gained a reputation for llama trekking in Peru with a purpose has announced a custom eight-day program for small groups of six to 10 surf aficionados that visits Lima and the north coast of Peru, a region known for its perfect waves.

The per person (double occupancy) rate of $3,500 is for a group of 8 to 10 for trips in 2012. Those requesting a single room pay an extra $500. Included are accommodations, airport/hotel transfers, carbon-offsetting for included flights, English-speaking guides, some meals and shuttles as required by the itinerary. Optional activities (for an extra fee) include surfing lessons with the former street kids, raft fishing, horseback riding and zip lining.

Through the non-profit organization Casa Generacion inner-city kids from some of urban Peru’s toughest neighborhoods are experiencing the wonder, power and beauty of their own coastline by learning to surf, eventually becoming world class competitors and expert instructors.  Many of these kids came into the program wanting to escape the physical or emotional abuse that runs the gamut from beatings by drug addicted parents to being sold into sex slavery.

A portion of the tour fees are donated to Casa Generacion’s safehome for kids in San Bartolo. Since its inception in 2005 it has now grown into a home with about 20 children. The children are not only given the opportunity to attend local schools, but within the house there are also weekly music and art classes. Because San Bartolo lies right on the beach, surfing has also become a huge part of the culture of this home.

“A chance encounter with local surfers near the San Bartolo safehome introduced a few of the kids to the surfing life and a phenomenal change took place,” explains Llama Expeditions founder Diane Valenti. “Suddenly hardened street kids were riding the waves, connecting with a natural world they had never known. As the purifying salt water washes over them, these street kids are finding in themselves a new capacity for achievement.”

Valenti cites one of many success stories. “Yeferson Bellido, who a few years ago was begging on the streets of Lima is now a regular at national surfing competitions, recently ranking fifth in the nation. This now-champion surfer is in college studying architecture.”