Bangkok: International arrivals into Asia/Pacific1 destinations grew by 10% year-on-year during March 2012, according to preliminary data released by the Pacific Asia Travel Association (PATA) today. All sub-regions reported solid gains with North America, South Asia, Southeast Asia and the Pacific showing double-digit growth. Despite its very large base of arrivals, Northeast Asia still managed to show healthy growth of 8% for the month, year-on-year.

International arrivals to North America surged by 11% in March 2012. This very strong result was supported by the continued growth of arrivals to Canada (+9%) and the USA (+14%). Besides the strong performance of intra-regional travel flows, arrivals from Germany and the UK showed outstanding gains of approximately 30% during March 2012 after several years of sluggish growth. In addition, arrivals from Japan set new monthly arrivals records to the USA and Mexico.

Northeast Asia continued with its positive momentum during the third month of 2012. This upward shift can be attributed to the recovery of international arrivals to Japan (+92%) a year after the earthquake and tsunami of March 2011. The rebound of Japan has been substantial to date and its international arrivals were only 4% lower than those of March 2010. The easing of restrictions on solo travel from Mainland China to Chinese Taipei has significantly increased traffic to the latter destination, which saw 250,000 arrivals from the mainland in March 2012, an increase of 65%. Foreign inbound into Korea ROK also saw a dramatic increase for the month (+17%). China reported growth of 1.4% for total inbound crossings. However, the foreign arrivals count increased at the much stronger rate of 7.5%.

South Asia was the second fastest growing market reporting 14% year-on-year growth during March this year although in terms of visitor volume, it was still far behind other Asia/Pacific sub-regions (860,000 arrivals for the month). With the exception of the Maldives (which reported a 5% decline), all reporting destinations within this sub-region performed well with gains in foreign arrivals of more than 10% for the month. Nepal and Sri Lanka in particular were very strong performers during March 2012, with gains of 37% and 21% respectively.

Southeast Asia became the fastest growing sub-region in Asia/Pacific during March 2012 with a 15% increase in international arrivals. Thailand managed to post double-digit growth (+12%) for the first time since September last year when the floods took a toll on international tourism. Overall strong travel demand to the sub-region contributed to healthy growth for all reporting destinations. The Russian Federation is now as important as UK in terms of arrivals from Europe, while China and Korea (ROK) are the largest Asian source markets for Southeast Asia.

The Pacific reported remarkable growth of 12% in March. However, this outstanding increase may – in part at least – be attributed to an earlier Easter holiday period compared to 2011 as well as a lower comparative base of international arrivals to New Zealand last year following the earthquake in February 2011. Growth was not evenly spread across small Pacific islands either; the Marshall Islands (-39%) and Papua New Guinea (-3%) each recorded a decline for the month while other reporting destinations showed positive growth in March ranging from Samoa at +3% to Vanuatu at a staggering +108%.

Martin Craigs, PATA CEO, said: “Even under the constraints of the current global economy, the Asia/Pacific region continues to produce strong performances in international travel flows. This result, after just three months of 2012, has generated almost 7.5 million additional foreign arrivals into Asia/Pacific destinations. The continued growth puts the region firmly on track to reach PATA’s forecast of 450 million arrivals for calendar year 2012. 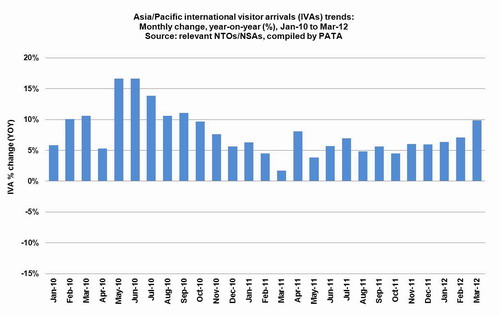